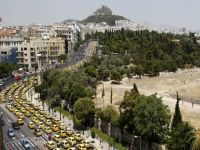 The largest demonstration in recent years, in Thessalonica, happened on the afternoon of Saturday, the 10th of September, organized by PAME (Forward All Militant Workers) and the fronts of small farmers, students and women in Greece, against the predatory policies of the Social Democratic government, the European Union (EU) and the IMF.

The demonstration took place at the time of the opening of the Thessaloniki International Fair, which was inaugurated by the Prime Minister, who has persisted in a political line against the people and workers and announced new measures that will shrink the income of the population.

In a Sulka speech, at the time of the demonstration, Sotiris Zarianopoulos, a member of PAME called all workers and all lower classes to promote a combative atmosphere everywhere, to strengthen their struggles and prepare for the next strike.

Thousands of protesters marched in the city center to the climate of fear and intimidation that the government seeks to cultivate. Attempts to create a scenario with incidents around the demonstration of the working class failed. Even if the media sought to focus on international television, once again, and the provocative activities of small groups, the reality was that they wanted to hide the tens of thousands of workers who demonstrated with slogans and flags of militant PAME.

The slogan "The crisis and the debt do not belong to the people, they came through the profits of capitalism," "Capitalism cannot become human," "Worker, without any gear you can spin. You can do without leaders" resounded in the streets of Thessaloniki.

The demonstrations of the combative hard-working class took place in an organized and well protected way. We should note that on Saturday morning, a massive and dynamic demonstration took place in Athens, where the General Secretary of the CC of the KKE, Aleka Papariga, participated and expressed the following affirmation:

"We must put aside our fears, illusions and hesitations, otherwise we will find ourselves literally with our backs to the wall, working people, the working class, especially the youth. Right now the countdown should begin for rebirth and for the counter-offensive movement."

The same night, in his speech at the KNE-ODIGITIS festival in Patras, Aleka Papariga noted that "It is a recurring serious possibility that before a substantial recovery is made, a new economic crisis with global dimensions will manifest. It is also possible that the competition between capitalist states sharpen and that centrifugal forces are observed.

"Without aggressive intervention by the population, the results will be unpredictable, catastrophic, and with new negative consequences. For this reason people cannot be mere fatalistic spectators, feeling disoriented and afraid."

"It is no exaggeration to say that we are witnessing a cessation of payments of wages and pensions in Greece. It is no exaggeration of the fact that Greece will be even more involved and deeply threatened by competition from the imperialist powers in the region, with the arms of NATO and the mechanisms of repression, the U.S. military will intervene openly in order to acquire this or other markets.

The danger is great, since the national bourgeoisie seeks to take part actively in this struggle, regardless of the sovereign rights of the country - loyal to their class perspective. The country is thought of differently by the population on the one hand, and by the capitalists and their parties on the other.

It is no exaggeration to predict that - in terms of increased unemployment and poverty, while the class struggle is more obvious - we will bring the near downfall of the government.

The procedures for the so-called "national salvation" government will accelerate or vary, for example, government alliances of the left-center, etc.. There may be rapid alternations of governments, cyclical impasses and / or a major impasse in attempts to achieve the stability of the bourgeois political system.

Under the conditions in which the bourgeois political system has been shaken, the people must be completely ready to take the situation further, expand and break the deadlocks of the system, moving in a counter-attack, to put as the objective overcoming the power of the monopolies.

The Secretary General of the CC of KKE affirmed that "we fight with characteristics of class conflict, break and overcome, so we can buy time so that we can force the opponent, the government, big business and the EU on a temporary setback, at least, to arrange the main counter-attack, with support and international solidarity: by overcoming the power of monopolies, for the popular power of the working class, for the popular economy that will make people the owners of wealth, all protagonists in the Renaissance in all levels of popular control, from the economy to the political system and international relations of the country."