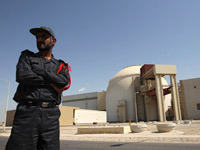 The commissioning ceremony of the country's first nuclear power plant took place in the Iranian Bushehr. Currently the Bushehr nuclear power plant operates at 60% of its capacity, producing 300-400 MW of electricity. According to Iranian Foreign Minister Ali Akbar Salehi, the plant will be working at full capacity of 900-1000 MW within two to three months.

Construction of the Bushehr nuclear power plant from the very beginning gave rise to problems that had nothing to do with energy. The U.S. and Israel objected against giving Iran access to nuclear technology fearing that the Iranian authorities will be able to use them to build an atomic bomb. Director of the Institute of Strategic Planning and Forecasting Alexander Gusev said that the accusations were groundless. "The Iranian authorities have emphasized a policy of openness to international inspectors," he told "Izvestia". The IAEA inspectors have full access to both Bushehr and the processing plant at Natanz.

Even if the situation becomes aggravated and international inspections will be removed from the Iranian nuclear facilities, Tehran will not have enough time to enrich available uranium to a weapon condition. There may be another danger in Bushehr nuclear power plant.

"No one expects the Iranians to make stuffing for a nuclear bomb from their existing fuel," said Ali Ansari, an expert with London think-tank "Chatham House". "The station itself may become a bomb if it is mined or subject to air strikes. Bushehr is located on the Persian Gulf. If the power plant is actually detonated, the radioactive cloud, depending on the wind direction, will go either to Iraq and Kuwait or Saudi Arabia, Bahrain and Qatar. In any case we are talking about an ecological catastrophe of a regional scale." In addition, Ansari said, the beginning of the Bushehr nuclear power plant operations can provoke a "peaceful nuclear arms race" across the Middle East.

"Following Shiite Iran Sunni Saudi Arabia will want to have its own nuclear power industry," warned the British analyst. "Turkey, that has increasingly more significant claims to the leadership in the Middle East, is also accelerating the construction of its plant in Akkuyu. Israel will not be left out either. Earlier this month, local media reported on the intention of the Ministry of National Infrastructure to build a nuclear power plant in the town of Dimona in the south of the country.

There would be nothing wrong with the development of national nuclear power if it had not been for the fact that the Middle East is a zone of instability that turns into local wars now and then. The chain reaction of nuclear power plant, which will inevitably follow the launch of the Bushehr plant, would be capable of turning these into nuclear wars.