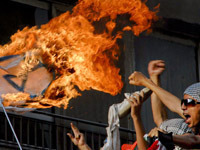 Traditionally the most important events in the Muslim countries including such recent ones as "days of rage" and attacks on foreign embassies happen on Friday.

On the night of September 9 in Cairo a crowd of thousands of people captured and looted the Israeli embassy. Among other things, secret documents were stolen. The staff of the diplomatic mission managed to escape at the last moment by a helicopter. The next day, more alarming news came from the Egyptian-Israeli border. It was reported from Tel Aviv that gunmen opened fire at the Sinai Peninsula patrol, and then went deeper into Egypt. The anti-Israel attitudes spilled out in Egypt back on August 18, after five Egyptian border guards were killed and one police officer was fatally wounded in a skirmish at the border.

According to Israeli media, all six Egyptians appeared in a car in the area where, according to Tel Aviv, a fight with Palestinian terrorists was ongoing. All the circumstances of the shooting of the Egyptian car are still unknown. In any case, the Egyptian government demanded that Israel apologizes for the deaths of the border guards and police. Israeli Defense Minister Ehud Barak expressed his regrets and offered to conduct a joint investigation, implicitly acknowledging the blame of his subordinates. However, many Israeli experts tried to shift the blame on "Palestinian terrorists" who allegedly blew up the Egyptian car, and then finished off the survivors.

Of course, for both the Palestinian and Israeli side it is extremely advantageous to shift blame on one another. In the event that Egypt and Israel have fallout, the Palestinians could expect to end the former blockade organized during Mubarak. For Israelis it is also extremely beneficial to present the Palestinians as the bandits who are not averse to achieving their goals by killing their own brothers, the Arabs.

In any event, the incident has caused significant tension between the two countries, culminating in the destruction of the Israeli Embassy in Egypt. The attack of an aggressive Egyptian mob did not come as a surprise. Since the incident, the Egyptians have been having regularly gatherings near the building of the Israeli embassy and were rather hostile. For example, a few days after the murder, a local "Spiderman" Ahmad al-Shahada, risking his life, has removed an Israeli flag, encouraged by the crowd, and hurled it down.

The culmination of the explosion of anti-Israel passions were the events of the night on September 10, when three people died and thousands more were injured. The incident was, perhaps, the main event since the fall of Mubarak and even outshined the trial of the deposed president. It caused serious internal political upheaval that rocked the stability of the current Egyptian cabinet of ministers.

Its head Esam Sharaf who started as the Prime Minister on March 3, after the overthrow of Mubarak, has tried to dissolve it and resign. However, he was not allowed to do so by the officers and generals of the Supreme Military Council. Sharaf's decision was largely due to the fact that over the past six months, the Egyptians grew disappointed by the new government, which has so far failed to initiate serious reforms, and even finalize the case of the Mubarak clan.
Every Friday a crowd of thousands of demonstrators at Cairo square Tahrir was getting larger, and it was clear that sooner or later an explosion would be imminent. Egyptian military could not follow Murambak's path and force the crowd to disperse as they remained mindful of the events that ended the reign of the former president. No amount of punishment that they threatened the demonstrators with could calm the boiling passions.

The fact that the present government has failed to solve the problems of the country is not surprising. You can speak at length about the fact that the profitable industry is concentrated in the hands of a small group of individuals. But even if we imagine that suddenly tomorrow they decide to divide these revenues equally, it will still not solve the problem. In the country that has not yet been able to cope with the demographic explosion, and considering limited resources, it is simply impossible to change the situation.

Secondly, it is certain that the main political parties in Egypt have anti-Israel agenda. Those who will be the most successful at demonstrating their intention to fight against "the Zionist enemy," will enjoy the support of the Egyptian crowd. It does not matter who dons this anti-Israel attire - "Muslim Brotherhood" or someone else. The atmosphere of confrontation is what is important, and it is obvious that the days of the Camp David agreement are over.

The Egyptian evolution is visible to the naked eye: after the departure from the ideas of Arab nationalism, and then a compromise with the West, radicals are confidently moving towards power.

The arrival of the radicals to office with the help of Saudi funds is only a matter of time. Of course, this will seriously complicate the situation in the Middle East, because even with the help of the Saudi and Qatari money the Islamists will still not be able to bestow all the population that in the near future will reach 90 million people. This will exacerbate the situation.

For Israel this may mean a return to the days of total confrontation with its Arab neighbors. It seems to be logical that a multi-million Egyptian mass wants to clash with the Israelis, and it will have it, because a war is the surest way to channel public anger in the right direction and get rid of the troublesome elements.

As for the West, its opportunities to make a decisive influence on the situation after the removal of Mubarak are extremely limited. This is largely due to the fact that Israel in its history since 1948 has allowed the West to use it as an instrument of expansion of Western powers in the Middle East. Now Tel Aviv has to reap the rewards of its aggressive policy.

It would be sufficient to talk to Arabs from different countries to feel the degree of anti-Israeli intolerance that unites not only the bearded fundamentalists, but also traders, soldiers, and even intellectuals. Take, for example, the aforementioned Egyptian "Spider-Man," Ahmad al-Shakhatov, who, after the abuse of an Israeli flag, became a national Arab hero and has been receiving thousands of thank you letters and hundreds of marriage proposals on a daily basis.

With regard to recent events in Egypt, it seems that someone has competently directed the event back on track - towards an external enemy. But who did it? The Egyptian authorities themselves are gently nodding to the machinations of Qatar, Saudis and local radicals.

Obviously, the Egyptian authorities are trying to shift the blame for the events to some external force. Suffice it to say that on September 11 police commandos stormed the offices of Egypt Qatari television channel "Al Jazeera", detaining several employees of the channel for the fact that by their live broadcasting they allegedly incited the crowd. Later, Egyptian authorities announced the closure of the news service of "Al Jazeera" in Egypt "Misr Mubashir" that broadcasted live. Certainly, there are plenty of questions about the activities of the Qatari channel. However, the Egyptian authorities raise even more questions. The event began with a Friday sermon of the Imam who said that "it would be a shame if the Egyptians forgot about the Revolution," and pointed out that Mubarak's senior officers who gave the order to shoot at people have not been punished.

The current authorities were berated as well for sending to jail thousands of people who disagreed with their rule instead of properly sentencing Mubarak's functionaries. The action that was planned as an anti-Israeli one nearly spilled over into a purely anti-government.

It is interesting that the very "Muslim Brotherhood" in recent weeks urged their supporters to abandon the massive anti-Israeli actions on Tahrir Square so as not to give the authorities a pretext for repression in the expected parliamentary elections. And yet there was a pogrom. It turned out extremely beneficial for someone to direct the anger of the crowd at an external enemy, and it was quite successful. In any case, the incident provoked serious consideration of the path of one of the biggest countries in the region among the Arab states in terms of population.

Some experts are sounding alarm over the fact that the return of Egypt's anti-Israel track threatens a full-scale war in the Middle East. However, there are many "buts".  It should be noted that the massacre took place exactly a few days before a promising visit to Egypt of the Turkish Prime Minister Erdogan. Now Turkish leaders, seeing the further development of political processes in this country, are paying more attention to it, trying to direct these processes in the right beneficial channel.  In the foreseeable future it is going to recover its impact on the Arab land lost in the 19th-20th centuries and is not interested in an immediate clash.

Even in the worst-case scenario, no immediate war by Egypt should be expected. From the perspective of the Egyptian government, it is much more effective to incite the anti-Israeli attitude without going too far.

A Soviet gift of Aswan High Dam on the Nile has largely made Egypt a hostage of Israel. Cairo is well aware that the Israelis can turn a blind eye to some attacks. In the case of a full-scale war no one can guarantee the security of this great object, which is enough to kill a flying squadron, and with it, almost all of Egypt. In that case, there is also a corresponding secret plan, whose implementation in critical times means the erosion of the country to the Mediterranean Sea. Given that over 90 percent of Egyptians live in the Nile Delta, Israelis can always remind the Egyptians of the existence of the Achilles' heel to prevent any negative developments.