Urgent Questions to NATO on Libya 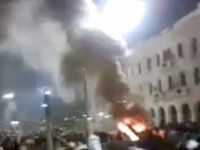 1) Why at this time is NATO bombing Bani Walid and other sieged cities? (They have been under siege by the Abdel Jalil forces; therefore NATO should try to protect the civilians inside from the aggression of Abdel Jalil forces: INDEED, when civilians were inside Misrata and the city was under protection and control of the Libyan army, NATO heavily bombed that army).

2) Why is NATO regularly helping the NTC? All the time, advances of NTC were made possible by NATO. The so-called "rebels" admitted that without NATO they could never have achieved anything. So regime change is the real objective?

3) Is NATO bombing Sebha and Sirte too? Why? What about the civilians?  Why do we get repeated reports about mustard gas and poisoning of water?

4) Why is NATO not concerned about the lack of basic things inside the cities under siege? Civilians are suffering and trapped inside; NTC armed people admitted (to Reuters) that civilians inside Sebha don't have money and fuel to escape.

5) Why is NATO not concerned about protecting civilians from the NTC as in Tripoli and elsewhere. A lot of African migrants and Black Libyan are killed and harassed...

6) Why did the NTC Buhajar (in charge of the man-hunt...) say that NATO bombed Birak because Qafadi was there? It means that NATO participates in the manhunt and rtegime change.

7) Have NATO countries sent their men with "boots on the ground" to help NTC? . Do you coordinate with them? And what about UN Resolution 1973?

8) Are you aware that many lawyers are starting filing charges against NATO for war crimes and for violations of UN Resolution 1973 (when NATO bombs Libyan army without a direct threat to civilians, this is illegal, it is a regime change)..