Crimes against Bedouins in Israel 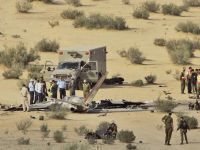 The plight of the Negev Bedouin inside Israel rarely makes the pages of the corporate press, yet the oppression these people suffer at the hands of the Israeli authorities includes racism, intolerance and discrimination more befitting of Nazi Germany than a modern State which claims to be a democracy.

As Moshe Dayan said in 1963 "This phenomenon of the Bedouins will disappear."

Israel's treatment of the Negev Bedouin, Israeli citizens but Arabs, is sickening: 70,000 people live in 45 villages. Their communities do not appear on maps, therefore they do not exist and as such, they have no right to municipal services. No running water, no electricity supply from the national grid, no sewer network, no schooling. Not being recognised as formal communities, they do not have building rights and therefore any shelters which do exist, are bulldozed.

"Supreme Court judge (emeritus) Eliezer Goldberg listened to many voices and together with a small committee put together "the Goldberg Report" in 2008. This report, while using positive rhetoric, such as "the villages must be recognized, as much as possible," also recommended that Bedouins should not receive land beyond route #40, re-establishing the norm that Bedouins, while being citizens, are not really a fully legitimate part of our country... The Bedouin community, which had fully cooperated with the Goldberg committee, was disappointed.

Prime Minister Ehud Ulmert assigned Ehud (Udi) Praver to create a plan implementing the Goldberg Report recommendations. Praver's plan was released a couple of months ago. This plan did not implement the Goldberg Report recommendations, but rather created a completely new plan. In the creation process of this new plan, NO BEDOUINS were consulted. NONE.

Creating a plan for a community, without even thinking of considering their voice, is a strong statement - indicating that Israel still perceives the Bedouin as less than citizens, less than... Beyond this strong statement, it also means that the chance of implementing the plan is really low. The Praver plan includes massive violent enforcement, concentration, no clear statement as to the recognition of villages, use of "divide and rule" tactics, intended to split the community, and no option for the community for negotiations. The end result was to be - reduction of actual use of land by the Bedouin community from 300,000 dunams to no more than 200,000.

Naturally, the leadership in the Bedouin community felt betrayed yet again, and together with organizations such as ACRI and Bimkom expressed their disapproval of this plan. But, evidently, that was not important to Prime Minister Binyamin (Bibi) Netanyahu: his concern was of the criticism from the Right.

It is with sadness, disappointment and a feeling of intense distaste that I write the next steps decided upon by Netanyahu:

Netanyahu gave Yaakov Amidror, the director of the National Security Council (NSC), the mission to "correct" Praver's plan. Yet again, the Bedouin are treated not as citizens, but as a security issue. In addition, Foreign Minister Liberman assigned MK David Rotem, head of the legislature committee in the Knesset, to study the plan, and make sure it is in accordance with their party's line. MK Rotem is demanding that the maximum amount of land allowed to remain in the hands of the Bedouin be no more than 100,000 dunams, and that another 300 police be assigned to enforce the concentration of the Bedouin.

There are 100,000 Bedouin living today in the villages, an agricultural people and young population with a yearly growth of about 5%. The entire land they utilize is 300,000 dunams - used for their homes, their livestock, and their agriculture.

Rotem is demanding that it be reduced to 100,000 dunams. In contrast 50 newly established single family ranches (Jewish) in the Negev have received about 1,000 dunams each from the State. The words of MK Rotem "...concentrate them, there they will till their land", are extremely ironic pending this planned concentration...

MK David Rotem's opinions on Arabs are well known. For example, he presented a law stipulating that Israeli citizenship be conditioned on service in the Israeli army. Now the Bedouin - who have no say in the plans for their future within their own country - have to accept the plans created for them by a person of MK Rotem's persuasions...

I don't believe it is possible, even with the use of massive force: police brutality, bulldozers, arrests, fines, demolitions, and village erasures - to evict the Bedouin from their lands and concentrate them. However, it seems we are about to step into a very dark era in Israeli history, and we are going to see the Bedouin community suffer tremendously before the government will change its ways. Eventually, at some time in history, Israel will realize that its treatment of its Bedouin population must be one of inclusion and dignity. But I am fearful of what will happen until then.

Recognition Now calls out to the Government of Israel to take measures concerning the integration of the Arab-Bedouin community of the Negev into the region based on the principles of partnership, equality, human rights, and a future of prosperity for all the Negev residents."