Seven points on the war against Libya 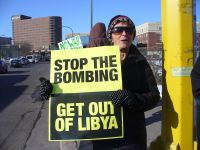 By now even the blind may be able to see and understand what is happening in Libya:

1. It is a war promoted and waged by NATO. This truth ends up filtering out of the same bodies of bourgeois "information." In La Stampa on August 25, Lucia Annunziata wrote: it is a totally "external war" that is to say made by NATO forces," and the "Western system, which promoted the war against Gaddafi." A cartoon from the International Herald Tribune of August 24 shows us "rebels" who rejoice, but from the comfort of riding a plane that has been stamped wirh NATO insignia.

2. This is a war in preparation for a long time. The Sunday Mirror of March 20 has already revealed that "three weeks" before the UN resolution "hundreds" of British soldiers were at work in Libya, framed in a sophisticated military corps and the most feared of the world (SAS ). Similar disclosures or admissions you can read about in the International Herald Tribune of March 31, about the presence of "small groups of CIA" and "a large Western force in action in the shadows," always "before the outbreak of hostilities on March 19."

3. This war has nothing to do with the protection of human rights. In the article already cited, Lucia Annunziata notes with anguish: "This NATO claiming victory is not the same entity that started the war." Meanwhile, the West is seriously weakened by the economic crisis, will it be able to maintain control of a continent that increasingly feels the call of "non-Western nations" and in particular China?

On the other hand, the same newspaper article that houses the announcement, La Stampa, opens August 26 with a full-page headline: "New Libya, Italy and France challenge." For those who still did not understand what kind of challenge it is, the editorial by Paulo Baroni (Duel to the deal) makes clear: the beginning of military operations was characterized by the frenetic activity of Sarkozy, "it was soon realized that the war against the Colonel would be transformed into a conflict of another kind: an economic war, with a new opponent, Italy of course."

4. Promoted for despicable reasons, the war is conducted in a criminal manner. I limit myself to only a few unexpected details taken from a newspaper. The International Herald Tribune of August 26, with an article by K. Fahim, R. Gladstone says: "In a camp in the center of Tripoli 30 bodies of pro-Gaddafi fighters were found riddled with bullets. At least two were tied with plastic handcuffs, and this suggests that they have been subjected to an execution. Five were found dead in a field hospital, one was in an ambulance, lying on a stretcher and fastened with a strap and an intravenous drip in his arm."

5. Barbarian, like all colonial wars, the ongoing war against Libya demonstrates further the barbarism of imperialism. In the past, many attempts have been made by the CIA to assassinate Fidel Castro, but these efforts were conducted in secret, with a sense of shame and fear for the possible reaction of the international public. Today, instead, to murder Gaddafi or to assassinate heads of state or others disliked by the West is a right proclaimed openly. The Corriere della Sera of August 26, 2011 had a headline saying triumphantly: "They hunt for Gaddafi and children from house to house." As I write, British Tornados, with the collaboration and information supplied by France, have pledged to bomb and destroy Sirte in order to exterminate an entire family.

6. No less barbaric than the war, was and is the campaign of disinformation. With no sense of decency, NATO has consistently hammered the lie that its military operations are aimed only at protecting civilians! And in the press, the "free" Western press? In its time it has published evidence the "news" that Gaddafi filled his soldiers with Viagra so that they could more easily commit mass rapes. This "news" quickly fell into the ridiculous, and then here is more "news" that the Libyan soldiers fired on children. No evidence is adduced, there is no reference to certain places and times, no reference to this or that source: the important thing is to criminalize the enemy to be destroyed.

7. Some time ago, Mussolini's fascist aggression presented as a campaign against Ethiopia to liberate that country from the scourge of slavery. Today NATO presents its aggression against Libya as a campaign to spread democracy. Some time ago, Mussolini never tired of railing against the Ethiopian emperor Haile Selassie as the "Negus dei negrieri." (King of Slaves/Slave Trader)  Today, NATO expresses its contempt for Gaddafi "the dictator." Since the nature of warmongering imperialism does not change, so its manipulation techniques reveal significant elements of continuity. In order to clarify who actually exercises the worldwide dictatorship today, rather than Marx or Lenin, I want to quote Immanuel Kant. In the paper of 1798 (The conflict of the faculties), he writes: "What is an absolute monarch? It is that one when he is in command says: "war must be" and in effect, the war follows. Arguing in this way, Kant took aim in particular at the England of his time, without allowing himself to be deceived by the "liberals" of that country. It's a lesson to treasure: the "absolute monarchs" of our time, the tyrants and planetary dictators of our time sit in Washington, Brussels and in major Western capitals.