All quiet on the Libyan front?

How odd. Western news agencies have gone quiet about Libya. Not a peep! You could hear a pin drop. Is something going on? Rather than copy and paste lies and hype and misquotations of the truth let us see what is really going on using real sources from within Libya itself. For those wannabe hacks who have tried to get my sources, find your own! 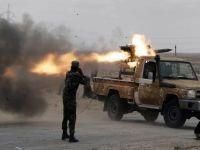 Despite months of bombing by NATO, to be more precise, since mid-February, the Libyan Armed Forces are gaining ground against the terrorist/mercenary forces which NATO is illegally backing against the terms of the UN Charter, which NATO is illegally arming against the UNSC Resolutions covering this conflict. Apart from this, NATO has violated the Geneva Conventions by attacking Libya's water supply with military hardware, then bombing the tubes factory which makes the pipes to repair it.

There is no answer to that. It is a war crime.

Under Protocol I to the Four Geneva Conventions, Articles 51 and 54, indiscriminate attacks on civilian populations are prohibited along with destruction of food, water, and other materials needed for survival. Indiscriminate attacks include directly attacking civilian (non-military) targets.

It is prohibited to attack, destroy, remove or render useless objects indispensable to the survival of the civilian population, such as food-stuffs, agricultural areas for the production of food-stuffs, crops, livestock, drinking water installations and supplies and irrigation works, for the specific purpose of denying them for their sustenance value to the civilian population or to the adverse Party, whatever the motive, whether in order to starve out civilians, to cause them to move away, or for any other motive.

War crimes. Humankind must demand a trial for those responsible in this attack, namely the heads of Government and State (where appropriate) of the NATO countries involved, the Ministers of War (although they call themselves "defence") and the diplomatic representatives (Ministers of Foreign Affairs) along with those involved in the military campaign.

Despite this savagery, despite this cold-blooded murderous and callous disregard for human life, things have not been so good for NATO and its terrorist fighters in recent days. According to reports on the ground, the Green Flag is flying in Benghazi, the foreign terrorists and foreign elements inside the city are fleeing like rats abandoning a ship, and the Libyan "rats" (the terrorists who have massacred people in the streets, who are racists and who have raped women and girls, committing massacres and then blaming them on Muammar al-Qathafi, who was to receive a humanitarian prize for his excellent record from the UNO in March) have fled to Derna.

Meanwhile there are reports that Tobruk further to the east is the next to fall, while the famous Misurata, which according to western news reports has always been in the hands of the terrorists, has Gaddafi troops singing in the city center.

Benghazi is a bloodbath, not because the Libyan Armed Forces are committing massacres, but because according to eye witnesses, NATO helicopters spent Sunday afternoon machine-gunning civilians (pending confirmation) and NATO-backed mercenaries slaughtered women and children of the Warfalla tribe who entered Benghazi to help free their brothers from this terrorist scourge. The latest reports are that Benghazi has fallen and has been liberated by Libyan Armed Forces.

The mercenaries, it now transpires, are backed by NATO and the terrorists NATO supports.

Eye-witness report: "In Nafusa mountains Libyan sources tell me that for each prisoner the rebels capture, they ask to exchange them for weapons and if they capture civilians they ask for ransom from their families. If the person captured is from the tribes of Warfala and Mishasha thet slash their throat because they are the largest tribes that support the Libyan government."

Pravda.Ru has received information that the terrorists in the Nafusa mountains are using armoured vehicles made in Italy. Once more, it is illegal to arm the "terrorists" or to take sides in an internal conflict. Add Italy to the list if this is true.