What is Obama's political game? 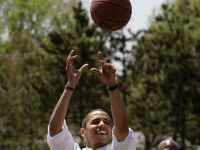 It is impossible to understand the political game that Barack Obama is trying to play. He who in his spare time, makes a point of playing basketball, does he have a strategy in discussions with the Republicans? So last Friday was the deadline the president gave the opposition to come to an agreement on the level of indebtedness of the country.

The debt ceiling has to rise, otherwise nothing will be paid. Interest on Treasury bonds, pensions, salaries for soldiers deployed to the so-called war against terrorism. Finally, default somewhere.

Mayor John Boehner, in a clear demonstration of contempt and disrespect to the President, did not respond to the call from Obama on Thursday and only spoke with the President on Friday, after giving a news conference to say that the government's proposal was not serious.

And Obama? He also gave explanations for public opinion. It is difficult to explain how he offered all that he offered and the proposal was rejected. A real slap. So then let's see, there will be dramatic cuts in the social services network (all the Democrats hate and the Republicans love).

There will be U.S. $3.5 trillion in spending cuts over the next ten years. An increase in taxes far more modest than in the joint plan of Senate Republicans and Democrats. And nothing to end the tax breaks for oil and gas companies, so much insisted on being included by Obama in the negotiations.

That is, everything the Republicans wanted. Nothing that the Democrats wanted. There is serious political risk in compromising the support of much of the electorate. Obama managed to do more on the right for the the Republican plan than they could even dream of seeing a Democrat proposing. But if Obama decided to occupy a right wing space and not the center-right as did Bill Clinton, what is the obvious move for the Republicans?

To become even more right wing, to differentiate themselves from the President. And therefore, it was thanks to the intransigence of the radicals of the Tea Party (the Sarah Palin group), that social assistance programs got the cuts that Obama has generously offered to the opposition.

It's as the old saying goes, the more you go bend over ... and Obama has only been bowing. He does not call for confrontation. He doesn't impose limits. The impression is that he comes across as wanting to be above good and evil, being the loyal balance. The cool guy who never raises his voice. But increasingly, the middle class, the poor and minorities have difficulty seeing in him as a leader.