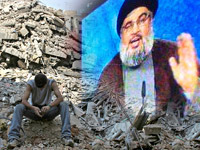 A potential conflict with the Lebanese radical movement "Hezbollah" is under discussion in Israel. The reason for the conflict may, for example, be a dispute between Israel and Lebanon over the maritime gas fields. So far "Hezbollah" is waiting and not making belligerent statements. Perhaps this has to do with the events in Syria as it may cause interruption of the weapons supplies.

Today, Arab and Israeli media seem to agree on one thing: within the last five years "Hezbollah" has significantly increased its military capacity, bringing the number of missiles to 40 thousand. This, in particular, was reported by "Maariv". According to the Israeli newspaper, against this background the attempts to exaggerate the successes of the Israeli army in the 2006 campaign look incompetent.

However, the mention of 40 thousand missiles capable of reaching Tel Aviv has appeared in the press before. There is a reason to believe that the military capabilities of the "Party of God", in fact, do not differ much from those that it had on the eve of the Second Lebanon War. All these years Israel and its Western allies carefully monitored the situation not to allow the arms shipments to Lebanon go beyond certain limits. It is not ruled out that in the near future "Hezbollah" will lose the opportunity to receive weapons from Syria that finds itself on the brink of civil war.

General, Israel media estimate today's actions of "Hezbollah" as very cautious. Internet portal Walla.co.il published earlier in the week the material under a typical headline: "Nasrallah (leader of" Hezbollah "Sheikh Hassan Nasralla - Ed.) is tense, but not because of Israel." Instead of receiving financial and military assistance from Syria, "Hezbollah" has to send its people to help the Assad regime in suppressing the demonstrations, Walla reported.

The most significant incidents on the Israeli-Lebanese border in the past six months took place in May, on the eve of Israel's Independence Day. "On the Nakba Day (May 14 - Ed.) Nasrallah acted synchronously with the Syrian command and led the campaign to the Lebanese-Syrian border," information portal Zman.com wrote.

However, on June 5 the Lebanese army with the knowledge of Nasrallah prevented the recurrence of the situation, blocking all approaches to the border. On the Nakba day Assad was alone, and" Hezbollah" demonstrated the limits of its flexibility. In addition, "Hezbollah "is well aware that an attack on Israel would lead to massive retaliation. Nasrallah also has reasons to reflect whether Damascus engulfed in the uprisings would assist them in the event of war with Israel, the publication wrote.

Of course, the press did not leave the bellicose statements from the patrons of "Hezbollah" without attention. In this regard it is telling that the threats against Israel were made not from Lebanon, but from Iran. "Zionist regime knows that in the event of a strike on the Islamic republic the response would be fatal." "Hezbollah's" revenge will follow immediately, and the Zionists will not be able to hide," said the leader of the Iranian branch of the organization Saff al-Din.

Another dangerous factor in fueling the war in the Lebanese direction may also be a recently discovered at the bottom of the Mediterranean Sea natural gas field, located in the disputed territory. According to experts, the total amount of gas contained in the Levantine basin may reach three trillion cubic meters.

Regardless of the balance of power, the new Lebanese-Israeli war cannot occur without an apparent reason. It is significant that in 2006 "Hezbollah" weighed all the pros and cons before starting the massive shelling of Israeli cities and military bases. Then, the IDF has entered an active phase of confrontation with the Palestinians after the abduction of Corporal Gilad Shalit by extremists. How could one not use such a good excuse to open a "second front" against Israel?

At the moment, the position of "Hezbollah" may be described as a wait. Today, the balance of power in Lebanon is somewhat different from that five years ago. Many analysts agree that the coming to power of Najib Mikati means a substantial strengthening of the position of the Lebanese resistance.

However, despite the apparent successes on the domestic front today, "Hezbollah" was in a difficult situation because of the events in Syria. So far the regime of Bashar Assad is holding the opposition forces back with the army, but it is hard to predict what will be the outcome of the Syrian drama. As a result "Hezbollah" may lose an important ally in the region that will immediately affect the situation in Lebanon torn by internal contradictions.