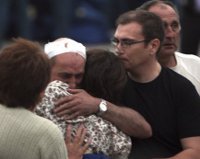 On Tuesday, July 12th, Russia is mourning the victims of the Bulgaria passenger boat that sank on the River Volga on Sunday. Many of the victims are children.

By Tuesday morning, 134 victims have been identified, the official website of the government of the Tatarstan Republic said. By 6:00 a.m. of July 12, nearly 60 bodies have been recovered from the water, although it is already clear the the total number of victims will exceed 100. The identification of the bodies takes place in Kazan, the capital of Tatarstan.

There were 209 people on the list of The Bulgaria passengers on Monday night. It became known that four people had not boarded the boat and stayed home for health or other reasons. In total, there were 205 people on board, of whom 23 were not registered as official passengers. Seventy-nine people have survived.

The victims will be buried on two cemeteries near Kazan; all the costs will be covered by the local government.

Russia's EMERCOM continues to search for the bodies in the river. The operation will continue until all the bodies are retrieved from the river, officials said. Divers have examined a half of the sunken boat. They have not been able to enter the main deck and the hold of The Bulgaria yet because of the strong current.

In pictures: The Tragedy on the Great Russian River

Yesterday, the divers found the room with 30-40 dead children on the boat. The children were playing in that room the moment when the boat capsized. It will be possible to retrieve the bodies only with the help of the vessels equipped with cranes.

"The bodies were found in the hold, where there was a game zone for children. The children were taken there for a party," officials told Interfax.

All the versions of the horrific tragedy are being investigated thoroughly. According to the main version, a technical malfunction occurred on board the boat, which was built in 1955 in Czechoslovakia. It was earlier said that The Bulgaria was listing to starboard as she was leaving the port in Kazan. One of the engines of the boat was defective too. The stormy weather also played an important role in the catastrophe.

The owners, leasers and several members of the state committee claimed that dozens of other outdated vessels, just like the sunken Bulgaria, constantly transport passengers on the Volga, but no catastrophes like that have ever occurred.

A member of the state committee investigating the tragedy said that the critical heel could not occur on The Bulgaria even if the liquid on board the boat (in fuel and oil tanks, fresh water tanks and waste tanks) were not distributed uniformly.

Valery Kirchanov, the director of Kamskoye Navigation Company, the owner of the boat, stated that the failure of one of the engines, as well as the light list, did not affect the safety of the trip. According to him, one engine on diesel-electric ships spins both propellers at once.

The weather, which is also said to be one of the reasons of the sinking, was unfavorable indeed, but it was absolutely acceptable for navigation, the official added. The waves during the thunderstorm were not higher than 1,5 meters, whereas the vessels like Bulgaria can navigate normally on 2-meter high waves.

Experts believe that the tragedy occurred because of the actions of the ship's crew and her captain, first and foremost. Most likely, the ship lost the so-called roll stiffness as she was performing a maneuver.