Why can't the ''rebels'' take Tripoli? 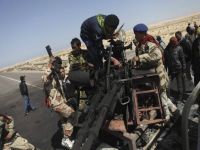 Nothing seems to undermine the Libyan government after more than four months of intense NATO bombing, and more than 4,300 air operations. Hundreds of precision bombs made from depleted uranium [1] were dropped indiscriminately on the Libyan people since the beginning of the imperialist aggression against Libya, killing over 1,000 innocent civilians and injuring thousands more.

NATO intensifies the bombing and massacres the Libyan people with the false excuse of "defending their lives," yet no one can explain why the Libyan people still stand firm and loyal to their government. They continue to withstand and be in front of the resistance to the harsh conditions of the economic blockade and against the criminal and systematic state terrorism practised by NATO countries.

The despicable NATO "allies" weren't expecting to find such popular resistance in Libya. Many people are confused. How is it possible that the supposed "monster and mass murderer" - as the western corporate media describes Gaddafi - has endured various attacks on several fronts, while still commanding the courage and support of most Libyans? Why couldn't these terrorist "rebels" by land, sweep out "the tyrant most hated" by his people? Where does Gaddafi's strength reside?

Strange are these "humanitarian" missions that kill innocent civilians and destroy the entire civilian infrastructure of a country on the pretext of defending the Libyan people. Strange are these "rebels" or "revolutionaries", or rather - according to the international media - "unarmed civilians" facing the government of Muammar Al Gaddafi, backed by foreign forces.

Strange are the leaders gathered in the National Transitional Council (NTC), who require more and more foreign money and weapons to kill their own "brother" Libyans.

Liars are the journalists that are members of transnational networks that every day report about the supposed advancements of the 'rebel' groups, and show us absurd videos about false fighting between rebels and Libyan troops, while the areas of alleged fighting remain under the control of the army and the popular militia loyal to the Libyan government.

Stupid are those who believe in all these lies and parrot the false imperial discourse. Let us ask ourselves something: if the Libyan people hate Gadhafi, why after four months of intense bombardment do the "Libyan rebels" not go and take control of the most populous area of ​​Libya's capital, Tripoli?

Can they call themselves "Libyan rebels" those serving the military orders of the imperial powers? Those ensuring the destruction of their own country and the deaths of their brothers, and against their own military failures, why do they not try to negotiate an exit and reconciliation with the other side? Do they enjoy autonomy these "rebels"? Or are they merely impudent, shameless mercenaries in the service of foreign powers?

Rebels are the people and their vanguard that fight against the prevailing system due to progressive ideals. The reality is that these groups are backward and regressive. The erroneously named "Libyan rebels" are nothing more than ordinary mercenaries in the service of NATO, who try to impose the interests of their masters. Their existence and actions in Libya are the product of a clearly orchestrated plan, prepared well in advance, as many other investigators write who have discovered the truth behind the Libyan conflict [2].

I was present in Libya during the most difficult moments of the imperialist aggression of NATO, and witnessed what really happens there, the most cruel, harsh and sad reality that faces these brotherly people [3]. This allows me to confirm everything I have written. Libyan troops do not directly face the mercenary groups. No.

The Libyan army resists the imperialist aggression of the NATO air force, which bombs the population and clears the ground, which then is to be occupied by the mercenaries. These carry out the sad role, ordered by NATO, as an army of occupation. The tactical retreat of the Libyan army, in front of the bombing, immediately produces the Libyan counter-attack, then the cowardly mercenaries are driven away.

Each day that passes without NATO achieving the stated objective of killing Gaddafi - thereby violating UN Resolution 1973 itself - the mercenary groups are more discredited before the few deluded Libyans that still exist, and also in front of the world. The harder the force and aggression applied, the more the masks of the imperialist mercenary forces are falling, the more there grows the military and popular armed resistance of the Libyan people, in morale and determination to continue fighting.

NATO and its allies know that time plays against them, that the consciousness of the Libyan people and the hatred against them grows as they increase their crimes.

Here's a secret revealed that explains the reasons for the strength of Muammar Al Gaddafi. The worst misfortune for a colonial army are decolonized minds and a people determined to die for what they believe.

*Member of the African Centre of Knowledge

[3] See the article "From the Tunisian rebellion to the Libyan resistance." On the Website. Cuba Debate.