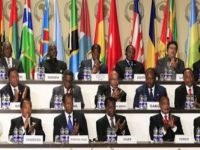 A bold critique of the attitude of the West towards Africa and Latin America was made by former Brazilian President Luiz Inacio Lula da Silva sparking a standing ovation at the African Union summit on Thursday. Lula criticized in particular the United Nations for not granting to any country in Africa or Latin America a permanent seat on the Security Council.

"It isn't possible that the African continent, with 53 countries, has no permanent representation on the Security Council," he said.

"It isn't possible that Latin America, with its 400 million inhabitants, does not have permanent representation. Five countries decide what to do and how to do it, regardless of the rest of the humans living on this planet."

Lula was referring to the five permanent members of Security Council (Britain, China, France, Russia and the United States).

Brazil, an emerging power with a progressive increase of influence on the world stage, has been fighting for a long time for a permanent seat on the Council of 15 members.

The conflict in Libya is the focus of the summit, which began on Thursday in the capital of Equatorial Guinea, Malabo, with criticism of the NATO action and involvement in the crisis in West Libya. This aggression against Libya is the continuation of the policy colonialist and imperialist countries have always had, creating wars and revolutions in Africa to steal the natural resources of African countries over the centuries.

"We need a UN that has the courage to impose a ceasefire in Libya and to require negotiations between the Libyan leader Muammar Gaddafi and terrorist rebel opponents," said Lula. "The solution to the conflict must be in Libya, between Libyans themselves, not from colonial or foreign powers," he added.

Brazil was one of five countries that abstained on the vote in the UN Security Council in March on Resolution 1973, which authorized the use of "all necessary means" to "protect civilians from the forces of Gaddafi," but in reality its interest was to legitimize a military attack on Libya for the governments of USA, France and England to steal Libyan oil. The authorization - contradicting all the precepts of the UN - has become a "blank check" for NATO to bomb the civilian population of Libya indiscriminately - something that is not in the UN document.

The crisis belongs to the rich

Lula also accused the West of unfairly imposing austerity measures on poor countries, including the Europeans, after a financial crisis that he said had its roots in the United States and in Europe.

"The crisis came from the United States, from American bankers, from financial speculation in the richest countries in Europe. And it is the poor countries of Africa, Latin America and Asia who will pay the bill," he affirmed. Now the "victims pay the price for a crime that they did not commit - that is what is happening in Greece," he said.

The West is "unable to see an Africa that is composed of human beings equal to those on the European continent," he said, adding that perhaps they think that "Africans or Latin Americans are second class citizens or because they look like natives."

"We just want to be treated equally and share the wealth being produced in this world." Lula called for increased integration between African and emerging nations.

Brazil, Russia, India, China and South Africa form the BRICS group, which appears as a possible counter-force in international affairs in relation to Western countries.