The flotilla could not sail 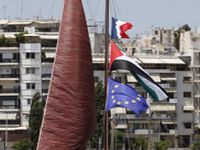 Greece's decision to prevent the flotilla sailing loaded with activists who are headed for Gaza is the latest in a series of measures that emphasize an alliance of states against the front of international non-governmental organizations.

"According to a decision of the Civil Protection Minister, Christos Papoutsis, the departure of the ships with flags of Greek and foreign ports from the Greek ports to the maritime area of ​​Gaza is prohibited," read the announcement issued Friday by the Embassy of Greece in Israel.

Last month, the Cyprus transport minister issued a similar statement. And earlier, the "council" of Turkey, the Foundation of Humanitarian Relief had canceled their participation in the Mavi Marmara, the Turkish-flagged ship that led the first Freedom Flotilla, when Israeli commandos attacked it on the morning of May 31 2010.

Just over a year after that attack, which killed nine activists, eight of them Turks, sparking international protests and worsening relations between Israel and Turkey, the second Freedom Flotilla - "Stay human" - was due to go to Gaza to once again try to break the blockade imposed by Israel in 2006.

All this seems to have had a deterrent effect on countries geographically close to Israel. "The Greece of July 2011 is not the Greece in May 2010 with regard to Israel," said a senior Israeli official involved in the attempt to prevent the second flotilla.

"The organizers did not realize this and are now paying the price," he added.

Half an hour after the USS Audacity of Hope left on Friday in the southeastern Greek port of Perama, without authorization, trying to reach Gaza, they were stopped by officers of the Hellenic Coast Guard.

"We were forced to return to a Greek harbor surrounded by fences and barbed wire," said a message posted on the Twitter social network for USBoatToGaza.

Hagit Borer, an Israeli-American citizen, said of the episode on the news portal Ynet Israel: "The commandos came with machine guns. It was pretty scary. They looked ready for combat, they were threatening. They wore helmets and had their faces covered. "

Another activist complained by the same means: "It's very sad that the Greeks are doing Israel's dirty work not allowing us to sail. I didn't know that the Mediterranean was the property of Israel. "

On Thursday, as it was moored in Turkey, the Irish ship MV Saoirse was forced to withdraw due to damage suffered. Earlier this week the Swedish-Greek Juliano was damaged in the southwestern Greek port of Piraeus. According to the organizers of the flotilla, in both cases there was a deliberate sabotage.

"It is inferred that the saboteurs were Israelis," accused the spokesman from the Irish ship, Raymond Deane. The Ministry of Foreign Affairs of Israel took two days to deny the accusation.

"Why did the organizers of the fleet not complain to the police," asked the Israeli spokesman Yigal Palmor.

Even the vicespokesman of the State Department (Foreign Ministry) in the U.S., Mark Toner, said Thursday that his country hadn't had any "independent confirmation" that the vessels had been sabotaged.

Of the approximately 1,000 activists who traveled in 15 ships, a few hundred have stayed on board nine operating ships, although stranded.

On Thursday, during the graduation ceremony of Air Force cadets in Israel, Prime Minister Benjamin Netanyahu already seemed to know that probably the undertaking of the flotilla would sink slowly.

In expressing the gratitude of his country to world leaders, he made special mention of his "good friend," Greek Prime Minister George Papandreou.

For the first time in a long time, some Israeli officials say, this time it's up to Israel to enjoy some international solidarity and legitimacy, although not necessarily the type that determines the world public opinion.

Ironically, the catalyst for this reversal was caused by the wide international solidarity that incited the movement of activists against Israel's policies towards the Palestinians, they observe.

In a sense, the flotilla is only a prelude to the real battle for legitimacy that at present is waged now between Israel and Palestine. Both peoples and the international community deal with the implications of making peace and creating a Palestinian state, whose approval can be achieved in September at the United Nations Organization.