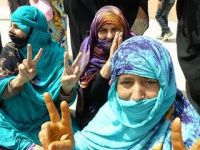 Morocco annexed, invaded and repopulated Western Sahara against international law in 1975 and has since refused to hold a referendum on independence or autonomy. Now there are allegations that Morocco is illegally exploiting the resources of the territory it annexed.

The Moroccan Army invaded Western Sahara in 1975 when the Spanish left their North African colony and after the annexation (the Green March), the Moroccan government started repopulating it with Moroccans, diluting the native Saharawi population, trying to create an imbalance by which the Saharawi people would be in the minority in their own country. In 1991 the United Nations Organization brokered a peace treaty between the Moroccans and the Polisario Front, under which Morocco pledged to organise a referendum on self-determination.

Under international law, the native population of the Western Sahara, namely the Saharawi population, should give its approval and agreement to the use of its resources by the controlling power and should benefit from these.

Local Saharawi residents have complained about their marginalization in their own country as Moroccan settlers, brought in to create an imbalance in the event of any referendum, benefit from the exploitation of fisheries and phosphates, in which Western Sahara is rich. Local Saharawi residents face an unemployment rate of 45%, while Moroccans pour in to the territory and siphon off its products.

Eddaowdi Aomar, 26, is one of six Sahrawi until last Monday held a hunger strike that lasted more than 60 days in the Moroccan city of Guelmim. His goal was to demand an end to "the massive plunder of natural resources of the Sahara from Morocco and improving the economic conditions of the Saharawi people," according to testimony collected by an activist of the association "Thawra Sahara."

Saharawis who try to organise demonstrations are arrested and tortured; "Many young people studying in Morocco are marginalized because they are Saharawi, while Moroccans living in the Sahara benefit from the jobs. The riches of the Sahara are also controlled by mafias and companies associated with the Moroccan government, " said Javier García Lachica, of the Western Sahara Resource Watch (WSRW). This international network, founded in 2005, reports that the resources of the Sahara are one of the reasons for the "Moroccan occupation".

Spain is one of the main culprits, setting up joint ventures for the exploitation of Western Sahara resources with relatives of the Moroccan King, Mohammed VI, according to the same source. WSRW activists are harassed by Moroccan authorities in Western Sahara and Saharawi fishermen are not allowed to dock in their own ports, by Moroccans.

So what is going on? And why does the EU do business with Morocco given its clear violation of international law?

Either Morocco lives up to its obligations under international law, or the international community might consider boycotting Morocco as a (shoddy, nay disgusting) tourist destination, along with its goods (the first three digits, 611, indicate they are from Morocco: 611 EAN Maroc - Morocco - ma).