Chavez is recovering and soon returns to Caracas, says brother 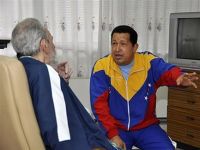 Within 12 days, the president of Venezuela, Hugo Chavez, who has been hospitalized for nearly two weeks in Cuba, will return to Caracas. The information is from Adán Chávez, the president's brother. He said that Chavez is recovering "satisfactorily" and shows no signs of "seriousness." Adán's analysis was presented in the form of an official statement, published on the official site of the President of the Republic of Venezuela. Friday (24th). The President sent messages to people on the internet.

"We do not know exactly when he returns. It is necessary to wait for a final medical evaluation. But in a few days, ten to 12, the president will be here. But more importantly, he has shown a significant recovery. An important recovery," said the statement.

In the last 10 days, Chavez, who made an official visit to Cuba, underwent emergency surgery for removal of an abscess in the pelvis. Since then he has been hospitalized in Havana. Due to his absence in Venezuela and the lack of detailed information about the state of his health, speculation surrounding the surgery appeared.

At the same time, opposition to Chávez sought to take political advantage of the disease suggesting his temporary removal from office. However, through the Congress, a decision ratified by the parliamentary majority allows him to govern from Cuba. In a statement, Adán said he had just returned from Cuba yesterday after visiting his brother.

The situation has also been exploited by right-wing media hype, especially in Miami, which broadcasts all sorts of versions of the disease and suggests that Chavez will not come back to Caracas.

"As has been officially informed, especially by the Ministry of Communication and Information, the President is recovering satisfactorily. The president is a very strong man, everyone knows it. A man who, along with a generous heart, has a powerful mind, which influences the recovery," he added.

On Friday, June 24, Chavez also transmitted on the feast day on which Venezuela recalls the Battle of Carabobo, several messages through his Twitter account. "I'm here with you in the tough workday! Ever onward to victory! We are winning! And we will win, " he said on his account on the social network.

Saturday on Twitter Chavez announced the arrival in Cuba of his daughter and three grandchildren to visit. "They and my grandchildren Rosines Gaby, Manuelito and El Gallito came to visit. Ah, what bliss to receive this bath of love! God blesses me!"