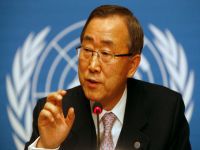 On Tuesday (21st), the UN General Assembly appointed secretary-general, Ban Ki-moon, for a second term in the world body.

The decision was made on the recommendation of the Security Council and grants to the former South Korean Foreign Minister, 67, a new period which covers 1 January 2012 - 31 December 2016.

In the resolution, approved with the measure, the General Assembly, composed of the 192 UN Member States qualifies as "effective and selfless" the services provided by Ban during his first term of office.

Of course, the current head of the UN had no opponent to contest the position, so he becomes the seventh secretary-general who has served two consecutive terms in office in the history of the organization.

The only secretary general that served for only one period was the Egyptian, Boutros Ghali (1992 to 1996), vetoed by the United States for a second term.

The UN Charter does not set term limits for a secretary-general, although so far no one has gone beyond the two terms.

Ban Ki-moon, a figure considered "quiet" and "contained" by the mainstream media, went to Brazil last week to raise support from the country for his bid for a second term.

Ban has been present for the more sustained action of the BRICS group, comprising Brazil, Russia, India, China and South Africa, favorable to the possible candidacy of Brazil for a permanent seat on the Security Council. During his stay in the country, the Secretary-General did not demonstrate support for the Brazilian intention.

For any change in the Security Council to happen, the UN itself needs to undergo a comprehensive reform, which Ban has avoided since he assumed the post in 2007.

Under his administration, the UN has seen military clashes break out on several continents. In Europe in August 2008, Georgia attacked the soldiers participating in a peacekeeping mission in South Ossetia, which provoked an immediate Russian military response.

At the time, the Secretary-General expressed "concern" about violence in the territory. There was no condemnation by him of the actions carried out by the Georgians or the Russians.

The major accusations against the administration of Ban Ki-moon are from Russia, the country whose ambassador to the UN, Vitaly Churkin, recently made serious allegations against Secretary-General Ban by denouncing his "interference" in the internal politics of countries like Libya.

Regarding the Israeli occupation of Palestinian territories or the repeated aggressions of the Zionist army against the Palestinian residents of Gaza, Ban Ki-moon made no effort to find a peaceful solution or even to condemn Israeli aggression.

According to Amnesty International, Ban Ki-moon has failed to make an assessment of the investigations carried out by Israel and Palestine for violations of international law that occurred during the Israeli military aggression struck against Gaza between December 2008 and January 2009.

Ban came to decharacterize the "Goldstone Report," research sponsored by the UN and led by South African jurist, Richard Goldstone, who pointed out evidence of war crimes committed by both sides.

The report was strongly opposed by the United States and Israel, besides having been practically shelved by Ban, who referred it to the Security Council, but has been postponing it within the body, giving successive postponements of the discussion to allow more time for "investigation" by involved parties.

Another important question is the international pressure against the Iranian nuclear program. Under pressure from the United States and its allies, the UN has issued successive sanctions against the Islamic state, even with reports from agents of the International Atomic Energy Agency (IAEA) saying that there is no evidence that the country is developing its project for military purposes.

In relation to the alleged nuclear weapons program conducted by Israel, as evidenced by the secret services of countries that are allies of Israel, such as France and the United Kingdom, the Secretary-General has few words or actions.

In addition to supporting international pressure against Iran, the UN gave full support to the military aggression carried out against Libya, accepting without hesitation the claims of the imperialist powers that the Libyan people rebelled against Gaddafi and were "under attack" from their own army troops.