Gaddafi winning the battle of time

NATO decided to extend the invasion of Libya: 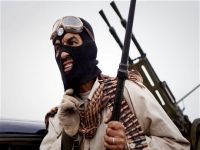 not winning hearts and minds with terror

Muammar al Gaddafi is winning the battle of time. The military operations launched by the Western powers against the arsenals of Gaddafi immediately after the Security Council passed UN Resolution 1973 (March 17, 2011) promised a quick end of the regime.

The enthusiastic and diffuse Libyan opposition was guaranteed a change over of power with the consistent help of the allies. Three months after the first bombing of Libya, the synthesis is a total failure of Illusions: Gaddafi plays chess before the cameras with his guests, in particular with Kirsan Ilyumzhinov, president of the International Chess Federation, who visited last week, while the Atlantic Alliance runs behind a new strategy that might allow them to gain in the other game, the military.

The passage of time cleared the smoke of propaganda. French General, Stéphane Abrial, Supreme Commander for the transformation of NATO, acknowledged Tuesday that if operations are prolonged in Libya, the situation could become "critical." The same day, Amnesty International completed the apocalyptic panorama with a double denunciation. The NGO made public the repeated atrocities committed during the war hidden by the West and the terrorist rebels, and the once best friend of the "free world," Gaddafi. An intelligence report adds a black argument to this badly prepared war: many of the weapons stolen during the war were sold to the regional branch of al Qaeda.

On June 1, NATO decided to extend the intervention in Libya until late September. The time operates as a substitute for what the U.S. Defence Secretary, Robert Gates, described as a lack of investment in the military and political will.

The NATO countries participating in the Libyan expedition-Belgium, Canada, Denmark, France, Italy, Norway and the UK are today facing a strategic reorganization of their mission to create a safe conflict perspective that will extend into time and whose stagnation may lead other countries to follow the example of Norway. Oslo announced on June 1 that it was withdrawing from the coalition on 1 August. Despite the continued support of the coalition, the terrorist rebels have advanced more in diplomacy than militarily and have not been been able to instal themselves so far in key positions.

Germany and Canada, both reluctant at first joined the group of countries that recognized the terrorist rebels grouped in the National Transitional Council (NTC). On 17 March, Berlin abstained from voting on UN resolution 1973 and also refused to participate in "Operation Unified Protector." (ed. who's the overpaid crap that comes up with these names?)

In turn, Canada considered that the terroristss are a "valid interlocutor" without being fully recognized. Not anymore. Berlin and Canada recognize the NTC as "the legitimate representative" of the Libyan people, making a total of 14 countries (United Arab Emirates, France, Qatar, United Kingdom, Italy, Gambia, Malta, Jordan, Senegal, Spain, Australia, United States, Germany and Canada).

Besides its financial cost (France spends one and a half million euros a day in Libya), the conflict had a high cost in human lives. According to UN estimates, between 10 and 15 thousand people have died since last February 15, and another million and a half were displaced by war. The coalition led by NATO admitted yesterday that the war gives a side benefit to branches of Al Qaeda in the region. A panel of French and foreign experts in topics of the Arab world warned of the "Islamist risk in Libya." In a report published a few days ago, experts found ambiguities and opaquenesses within the National Transitional Council.

The above mentioned report highlights that "Democrats are only a minority" within the NTC and said that this group fights with "former associates of Colonel Gaddafi, supporters of the monarchy and they advocate the establishment of a radical Islam." The international mission, directed by Eric Denécé, former head of French counter espionage, the French Centre for Research on information CF2R, made another startling discovery.

The report notes that "once Gaddafi's system fell in Benghazi, arsenals were stolen." This leads experts to the following reflection: "Western intelligence services are concerned about the fate of the weapons stolen by the insurgents from the Libyan arsenals, especially SAM-7 surface-to-air missiles." Where are these weapons? In the hands of one of the regional branches of Al Qaeda, experts say: "Al Qaeda in the Islamic Maghreb (AQIM) has purchased several copies of these materials sold by Libyan traffickers."

The final conclusion of the experts proves the disorders that led to the unexpected intervention of Western strategists. As noted in the text, "thanks to Libyan weapons, Al Qaeda in the Islamic Maghreb, AQLI, is beefing up its arsenal and increasing the threat that it represents to all states in the region."

The Allies continue, however, to provide assistance to the corrupt, unknown terrorist rebels. France announced it would provide 400 million dollars to the insurgents of the TNC from Libyan assets blocked in the west that belong to the Libyan people (about 150 billion dollars in total). Italy, in turn, promised to release another 500 million dollars.

Yesterday, the rebels managed to take control of three locations in western Libya, located on the route from Tripoli. Good news for NATO, if true (since they rarely tell the truth), but in no case does it clear the impression that Western military might operates in Libya with a broken compass. The only certainty is that the trigger-happy terrorist supporters intervened in Libya under UN mandate, but the actions undertaken since mid-March are light years away from corresponding to the UN mandate. The planes took off not to protect civilians, but to decapitate the Gaddafi government.