Pregnant woman drowns trying to help her husband and son 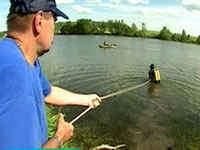 A family of three disappeared after swimming in a pond near the village of Yagodnya in the Moscow region. The story took place last Saturday, June 11, when the Ilyins - Viktor, 24, his wife Anastasia, 24, and their son Daniil, 5 - went to swim in a local pond and never returned back home.

Viktor's Ford Focus was found near the pond. The doors of the cars were left open. Their clothes, cell phones and a digital camera were found on the ground near the car. The photos on the camera showed the last moments of the life of the young family.

A rubber boat was found floating in the pond, which gave detectives a reason to think that the two adults and their son drowned.

On June 20, Russian news agencies reported that the mysterious disappearance of the family was solved. It was confirmed that Viktor, Anastasia and Daniil drowned in the pond. It was also said that the 25-year-old woman was pregnant with her second child . She was not swimming in the pond, but, most likely, rushed in the water when she saw that her husband and son were drowning, Life News reports

Divers retrieved the three bodies from the bottom of the pond. They were buried in the town of Ozherelye (Necklace), in the Moscow region, where they all lived.

The Ilyins went to the pond to enjoy a hot summer day and took a rubber boat along. They never came back home, and their friends started searching for them. When some of them came to the pond, they found the car, the blanket, two cellular phones and the camera.

The photos depicted the last hours of the three people's lives. The pictures showed them packing up, driving to the pond and enjoying the sun. The last photo showed the man with the child on his back swimming; the man's face is submerged in the water.

Divers were looking for the bodies on the bottom of the pond for five days. The bodies were found only when the pond was drained. Forensic experts said that Viktor might have had a convulsion of his leg muscles and started drowning together with his little son. Viktor's wife was watching them from the bank of the pond. Most likely, she rushed to help her loved ones, but drowned herself.

"Anastasia was three weeks pregnant. They were very happy to know about it. She was very careful, she was taking care of her baby and she would not swim in cold water. Viktor was a sports-looking, well-built young man, we just don't know how they could all drown there," Anastasia's friend said.