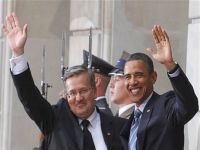 First surprised by the revolutions that toppled Arab allied dictators in Egypt and Tunisia, Washington has quickly adapted. Now the motto is to use the end of dictatorship to impose economic deregulation, or in other words to open the way to another form of exploitation of those countries. Just as the CIA used Serbian activists to launch the color revolutions, now they use Polish activists for economic transition.

Now free of Mubarak and Ben Ali, what model democratic transition should Tunisia and Egypt adopt? For Obama, it is undoubtedly the Polish model. The U.S. president said in Warsaw on May 28, 2008 that Poland has made "a journey for freedom that inspired many people not only in this continent but elsewhere." He listed the merits of Warsaw. First, the fact was pointed out that "the United States and Poland have developed an exceptional defensive partnership, within the enduring roots of the NATO alliance."

In order to further strengthen this alliance, President Obama and his counterpart, Komorowski, announced the deployment of a contingent of the U.S. Air Force in Poland, consisting of F-16 fighter-bombers, beside what the USA already sold to Poland. They also plan to build a base for the 'anti-ballistic missile shield'. However, the Pentagon has already sent Patriot missiles.

A great partnership was established between the two countries' special forces and the joint training of troops (2,600 men) that Poland has in Afghanistan under U.S. command. Also a subsequent agreement was announced that "will greatly reduce the barriers to trade in arms," thus allowing the import of arms from the U.S. by Poland, thereby increasing their debt.

We can appreciate Obama's enthusiasm for the Polish model with this statement: "We want to encourage the nations of the Middle East and North Africa fighting for democratic transition, especially in Tunisia and Egypt, to benefit from the Polish example."

This is not just verbal encouragement. In Warsaw, the two presidents met with "Polish activists for democracy" that had just returned from a "successful visit" to Tunisia, led by former President Walesa (Nobel Peace Prize). Given the results, they decided to send to Tunisia "other transition specialists to collaborate with the new government."

Obama also very much enjoys the fact that in Libya, Benghazi terrorists collaborate with Polish activists for a "political transition" of the country, in other words for the fall of the current government of Tripoli. This work was inspired by Washington.

Elizabeth Sherwood-Randall, an influential adviser to Obama, stated that "democratic institutions in the U.S., including the NED [1] already are supporting Polish efforts in the Arab movement for democracy."

The role of these "democratic institutions," directed and financed by the CIA and other federal agencies, is clearly described by the NED when he says that his work in Benghazi is facilitated by "important Libyan personalities who had already participated in his courses taught in Morocco and the USA."

Money is not lacking for these activities. The European Bank for Reconstruction and Development (EBRD), after having dismantled and privatized public properties of Poland and other eastern countries, goes to Egypt and Tunisia offering 5 billion dollars in exchange for "adequate reforms" which open the door to multinational firms and foreign military bases. This is a new crusade in which the Poles are at battle front, proud to carry the insignia of an F-16 funded by U.S. dollars.