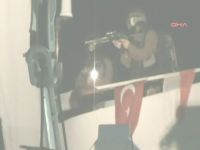 In late June, Freedom Flotilla II will depart for the Gaza Strip. The flotilla will consist of twelve ships with humanitarian cargo and about two thousand activists on board with the aim of breaking the blockade imposed by Israel since September 2007 on the territory administered by the Palestinian Authority.

In the case of Spain, which will provide a boat in the flotilla, developers organized around the platform, "Sailing to Gaza" have prepared for the expedition during the winter. Hundreds of discussions and activities to sensitize the public about the historical injustices committed by Israel against the Palestinian people have been conducted.

On the Spanish ship, in addition to activists and journalists from major media will be two public officials, European MP Willy Meyer and the Valencian regional deputy, Marina Albiol, both of Izquierda Unida (United Left), as well as former Senator Joan Josep Nuet. Among the activists I cannot quote my dear companion, Lacroix Salva, from the Spanish Commission for Aid to Refugees (CEAR) in Valencia.

"Sailing to Gaza" has requested protection from the United Nations for the Flotilla, as the Israeli army attacked the first Freedom Flotilla of May 31, 2010 in international waters, and in the end murdered nine activists (eight Turkish citizens and one American) on the ship Mavi Marmara, injured 50 others and seized the rest of the 700 people who participated in the expedition, taking over all their belongings and cargo on the ships.

And all of this happened with the usual indifference and complicity of the "international community" (that is to say, the Western capitalist powers) and the searing impunity with which the Israeli government daily violates the most basic international norms and human rights. Further evidence of the "position" of the "international community" is the opposition expressed recently by the UN secretary general, Ban Ki-moon, to the Second Flotilla and his call to governments not to cooperate with this initiative.

Among the nearly two thousand people who sail on ships of the Second Freedom Flotilla, from the five continents, there are many Israeli citizens. And an exceptional passenger, Hedy Epstein, born in 1924 in Freiburg (Germany) into a Jewish family. At only 14 years of age, she went to Britain in the months before the start of World War II. She was one of the ten thousand children who escaped the events of the war thanks to this initiative. Her parents and other members of her family were deported to Auschwitz in August and September 1942, where they were murdered by the Nazis.

Norman Finkelstein and other intellectuals have told us, with great courage and intellectual rigor, of how the State of Israel has used the "holocaust scenario" to extend a cloak of impunity and indifference about their shameful treatment of the Palestinian people.

In recent years, many organizations defending human rights and humanitarian aid have been alerted to the plight of the population of the Gaza Strip, a product of an Israeli blockade that has become a "prison" for its nearly two million inhabitants, mostly descendants of Palestinian refugees from the Nakba of 1948.

The Israeli blockade has raised the unemployment rate to 40%, has suspended up to 90% of industrial activity and caused the most serious damage to a population that relies enormously on international humanitarian aid. Indeed, the Gaza Flotilla aims to bring everything forbidden by Israel: cement, iron, medicines, sanitary products, medical devices, educational and school materials.

The Flotilla will embark on its journey in the year of the spring of the Arab peoples, whose model demonstrations have managed to overthrow the tyrants in countries such as Tunisia and Egypt, staunch allies of the Western powers on the "board" of the Maghreb. In Palestine, these winds have allowed a government of national unity between the PLO and Hamas, which means a breath of hope.

The Flotilla will set off in the direction of Gaza, but also in the direction of Ithaca, the imaginary territory of just causes that give meaning to the existence of millions of people around the world. The Flotilla aims to not only help the Palestinian people, but also to save the dignity of all humanity, today ill-treated in Gaza and the West Bank (with the infamous wall), as it was 70 years ago at Mauthausen, Treblinka and Auschwitz.