Tripoli welcomes the expulsion of U.S. air base 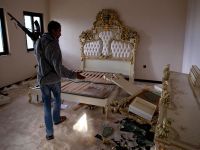 NATO expanded and intensified their operations with the introduction of British and French attack helicopters.

Amid the imperialist attacks by the North Atlantic Treaty Organization (NATO) against Tripoli (capital) to force the departure of Libyan leader, Muammar Al Gaddafi, the people of this city celebrated on Saturday 41 years since the expulsion of the U.S. from their air base, Wheelus Air Force Base. The people said that this was an act of sovereignty and independence.

"Tripoli today celebrates the expulsion and closure of the U.S. air base, Wheelus Air Base, June 11, 1970, reported through their Twitter TeleSUR special envoy to the city, Rolando Segura.

For the Libyans "the expulsion of the foreign military base was an act of sovereignty and independence," said the reporter.

"As in 1970, Libya today returned to raise their flag again at the former U.S. military base," indicated Segura, after reporting that "as Tripoli celebrated removal of the U.S. air base, unmanned U.S. aircraft were patrolling the area."

Wheelus was originally built by the Italian Air Force in 1923 and known as Mellah Air Base, used during the Battle of North Africa.

On the other hand, the Telesur journalist reported that military sources "qualify" as ridiculous the "allegations of drug use and mass rapes by the Libyan Army."

Meanwhile, NATO continues to bomb Libya. Government troops launched a counter-offensive to stop the advance of irregulars toward the populated towns that lead to Tripoli, under heavy bombardments.

The official Libyan news agency Jana, citing military sources, said Saturday that Gaddafi loyalists shot down a NATO helicopter at dawn on Friday near the town of Zliten, east of the capital.

Although the Libyan opposition has criticized NATO for doing "little" to stop Gaddafi's troops, the Atlantic alliance extended and intensified their operations with the introduction of British and French attack helicopters.

Also, the fighting in Libya between forces loyal to Gaddafi and Libyan terrorists extended to three cities in the North African country.

According to health authorities, at least 30 people died during the clashes between insurgents and the military forces of the Government of Libya in the town of Misrata.

The terrorists and the Army of Gaddafi also clashed this Saturday in the outskirts of the port city of Zawiya, in the western part of the country.

Military intervention on behalf of terrorists in Libya came under control of NATO on March 31, after the U.S., France and Britain led the colonialist actions.

U.S. Secretary of Defense, Robert Gates, suggested a lack of political and military commitment on the part of the western allied forces of NATO, underlining that this might "compromise" the effectiveness of its mission in Libya.

Imperialist attacks by NATO and its allied forces against Libyan territory have left thousands dead and has forced the exodus of nearly 900,000 people, according to agencies of the United Nations.