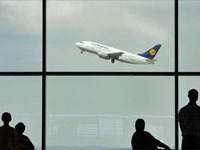 The Russian civil aviation has a new enemy - common Russian citizens with laser pointers. This popular device can become a dangerous weapon if used by malefactors. A directional laser beam blinds a pilots for a certain period of time.

On June 7, when Airbus 320 with 160 on board was landing at the airport of Rostov-on-Don, the pilot suddenly felt sharp pain in the eyes. The crew was professional enough to take the situation under control on time. The plane landed safely.

Investigators of the Interior Ministry of the Rostov region originally believed that the plane may have come under the attack of strong laser beams used during festivities, dance parties and music shows. The "dance party" version was discarded soon afterwards: there were no entertaining events held in the city that day.

There was another version offered during the investigation - someone used a laser pointer to blind the pilot of the aircraft. Unlike laser light systems, laser pointers are available everywhere. The Federal Air Transport Agency said that there was a number of such incidents reported before. Several of them occurred in the beginning of the summer of 2011.

What does a pilot feel when someone points a laser in his eyes? When it happens, a pilot is unable to control the on-board equipment, which is extremely important during landing.

"When landing, pilots need to scan the data of the aircraft movement, which is a lot of information. They also need to monitor the space outside the cockpit to control the positioning of the aircraft above the landing strip. Landing a 800-ton aircraft, especially when it is flying above the city - this is a very complicated and responsible thing to do," the pilot of the attacked plane, Dmitry Leontiev said.

As for the investigation of the incident in Rostov-on-Don, eyewitnesses said that they saw a young man standing on the balcony and pointing a powerful laser beam in the sky.

Mikhail Solovyov, the director of a company producing laser equipment, said that laser pointers are usually quite powerful devices because people use them during conferences and seminars. Such pointers can indeed harm our eyes, Solovyov said.

A laser pointer is available in any Internet shop for as much as $20. The laser of this device is strong enough (100 milliwatts) to light a match. More powerful devices (300-500 milliwatts) can overcome distances of tens of kilometers. If used towards a close object, they can melt plastic and even thin metal.

Green laser pointers are banned in the United States. Green is the brightest color for the human eyes. There are no such restrictions in Russia, though.

Professor Eugene Latush believes that the pilots of the plane, which was landing in the airport of Rostov, were attacked by a 200-milliwatt pointer. Such pointers use the laser on the crystal with neodymium.

Laser attacks were also reported in Germany's Hamburg. The police of the city arrested two teenagers, who pointed their laser pointers at planes just to have fun.

A laser beam pointed in the eye may result in a spasm of blood vessels in the organ of sight. A pilot may stay blind for ten minutes in such an attack. Unpleasant symptoms may disappear in half an hour, but landing usually lasts for several minutes.