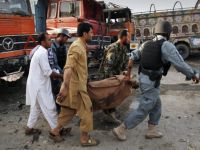 NATO strikes against civilian targets are causing indignation and repudiation, and Afghans are questioning NATO's presence

The NATO bombing campaign against civilian targets in Afghanistan in recent days has victimized dozens of women, children and innocent citizens.

According to Afghan officials, one of the deadliest bombings took place in the Nawzad district, Helmand province, on Saturday after a group of guerrillas attacked NATO soldiers, the International Assistance Force (ISAF).

ISAF requested air support and then the planes relentlessly bombed residential areas in the middle of the night. The provincial governor, Badr Jamaludin, said another 70 guerrillas were eliminated. For its part, bereaved families took the bodies of 12 children and two women on trucks to the district capital, Lashkar Gah, as evidence of attacks on civilian targets.

Already last week, day 26, another ISAF bombing in eastern Nuristan province killed over 20 civilians and 22 Afghan police. According to the provincial governor, "the policemen were killed by fratricidal gunfire and civilians perished when they were mistaken for Taliban, who were wearing civilian clothes and had taken refuge in homes."

But despite the explanations, foreign intervention and the persistent "collateral damage" cause growing outrage among the civilian population.

Another attack, which caused four deaths, has led to protests in the city of Talocan, on the 18th and 19th of May, which were violently suppressed, resulting in 15 dead and several wounded.

In February, a joint operation of international and Afghan forces in Kunar province left behind 64 dead civilians.

The situation reached such a point that the Afghan President himself, Hamid Karzai, has publicly challenged the practices of NATO. In a press conference on Tuesday, Karzai said that "if they continue to bomb Afghan homes when the government forbids it, their presence is seen not as a force in the war against terrorism, but as an occupying force. From 'this point on, the air attacks on civilian homes will not be allowed," Karzai stressed.

On Sunday, the Afghan president called the air strike on Saturday "a serious error" and "murder" and released a "final warning" to NATO forces, so that their "unilateral" operations cease.

"We have said repeatedly to the United States and NATO that their unilateral operations cause the needless deaths of innocent Afghans and that such operations violate human and moral values, but it seems that they do not listen to us," he affirmed in a statement with a much harsher tone than usual.

Responding to the accusations, the North Atlantic Treaty Organization (NATO) on Monday issued a statement in which it gives excuses "for killing civilians in the incident (...) in the Nawzad district in Helmand" and promises "to prevent such incidents in the future."

The quagmire that Afghanistan has become for Western forces makes some leaders start to distance themselves and prepare the ground for an eventual withdrawal. This is certainly the meaning of the words of Stephen Harper, Canadian Prime Minister, during his visit to the theater of war on Monday.

As he said, "Afghanistan remains a violent place, dangerous to its citizens, which means we must work to improve their destiny." He continued, "But this country no longer represents a source of world terrorism, which is a remarkable achievement."