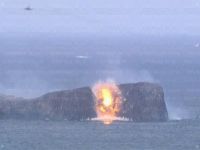 NATO launched nearly 3,200 attacks with depleted uranium bombs against civilians in Libya. This is the denunciation of the special envoy of Telesur, Rolando Segura. The total number of air strikes launched by the Atlantic Alliance against Libya is over 8,400 already. Almost 40% of these involved use of depleted uranium munitions, revealed the South American television journalist in his Twitter profile.

In Iraq, for example, the imperialist aggressors abundantly used projectiles containing debris resulting from the enrichment of the ore. Depleted uranium is highly valued by the military, since it is almost two times denser than lead and the perforation capacity is increased.

Besides the direct consequences of the imperialist bombings in Libya, it is necessary to take into account that depleted uranium is a radioactive substance that causes serious injuries in the renal and digestive tract, cancer in the lungs and bones and neuro-degenerative or congenital malformation in human beings.

The explosion of a DU munition reaches ten thousand degrees centigrade and releases highly toxic dust and contaminants that can travel thousands of miles. The dissipation of these particles may last for millions of years, so its effects on the environment and the inhabitants of the areas affected are perpetuated for generations.

Meanwhile, the attacks on Tripoli intensify on the entire urban area of ​​the capital. According to data gathered by the reporter from Telesur, since only last Saturday, the imperialist air force carried out 54 bombings in five cities. At least 19 people died and over 130 were injured in a series of attacks carried out in the last few days. 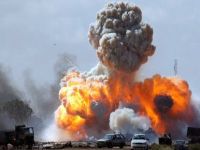 The continuation of the offensive takes place even as the African Union reiterates its call for the establishment of a ceasefire in the territory. The Libyan government is supporting the call and insists that the United Nations, that supposedly promotes dialogue, silence the guns. The government led by Muammar Qaddafi continued to release dozens of rebel prisoners in a process mediated by tribal chiefs of the North African country.

At the end of last week, Barack Obama and Nicolas Sarkozy, Presidents of the United States and France, respectively, have insisted that they share "the same analysis that Gaddafi should relinquish power," and to this end, NATO must "finish the job" there.

"It is impossible to know whether there was an economic intent in the operation against Gaddafi. What is undeniable is that his fall would give great way to Western banks. It would be the perfect embezzlement," said one U.S. specialist heard by the Lusa news agency.

The Lusa news agency asked for the opinion of several experts to review the flow of capital and money-laundering and investigated what would happen to the sovereign funds of Libya if the head of government was overthrown.

The conclusion is that the consequences would be the disappearance of sums belonging to the Libyan people, since "Gaddafi could no longer under practical conditions and policies recover the funds and reverse the process of investment in the West."

A financial operator directly linked to transactions involving the Libyan Investment Authority (LIA, its acronym in English), affirmed to the agency "regarding the diverted [financial] products, of great complexity, the situation is that not even the source of the investment knows exactly what was done with their capital."

According to Lusa, quoting an expert on sanctions, under the respective financial transactions, "They can go after the money until eternity. Not only the international authorities, but also, of course, the owner of the money."

"If the owner of the money disappears, the money remains unclaimed, so to speak, because in the source there was an investment that politically was made in secret. That is the situation Gaddafi is under," summarized the source.