Team of British observers say NATO is lying on Libya

British observers verify that there is no reason to attack Tripoli 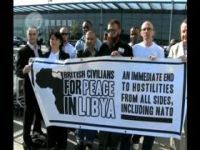 The consequences of the attacks perpetrated by the North Atlantic Treaty Organization (NATO) against civilian targets in Libya were evaluated by members of the British citizens' group called British Civilians for Peace in Libya, along with activists from France, Germany, Tunisia and Italy, who traveled to the African country to investigate the situation.

The activists found no evidence of the Libyan army shelling civilians, but did observe the impact of NATO bombs, and Dale Roberts, a spokesman of the second British mission in Libya, confirmed this to teleSUR.

During the interview from Libya, Roberts added that the two opportunities he has visited the nation during the conflict "I have seen and witnessed the effects of bombing on civilians. This has included schools, hospitals, infrastructure and civilian areas. Not only the NATO bombings of the troops are a threat, but to unarmed civilians," he reiterated.

The representative of the British observer group expressed that during the eight-day mission they have been trying to record all images as evidence, even when NATO bombs threaten to halt their journey.

After his experience, Dale Roberts said that the media in Britain, other European countries and the United States "are not telling the truth."

He added that the real reason for this manipulation of the media is because people would immediately reject this conflict. "European public opinion is against a war that was not debated in Parliament, even in my country, Great Britain, they are against the war because it was decided quickly without any reference of the Parliament," Roberts specified.

He explained that during the first visit they discovered that the reasons that were used to justify the invasion of Libya are false. "One of the main reasons why the United Nations (UNO) adopted resolution 1973 is that Libya was being blamed and made responsible for attacks on unarmed civilians. They are false."

"We visited the areas in Tripoli which were cited in the United Nations resolution, and it is clear that these areas were not attacked. It's another war that the Western countries are making against a developing country," the Briton denounced.

This Thursday, about 12 powerful explosions shook the capital of Libya in another wave of heavy bombing by NATO, damaging even a Coptic Church while at the same time in Benghazi, an attack raised concerns in the terrorist rebel command center.

Witnesses confirmed to international media that NATO planes flew over parts of central Tripoli and soon after six explosions were heard around 22:35 GMT, to which other explosions followed in the early morning.

These new bombings followed the same pattern of those that took place during the night and the early mornings of Monday and Tuesday, against the Tripoli suburb of Tajura, and the southern town of Al-Jafra, killing an unknown number of human victims and causing property damage.

Will there be a civil war in Afghanistan? Igor Bukker
Former USSR
Russia and Belarus end Zapad 2021 war games