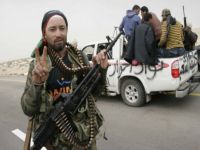 The Libyan terrorist armed opposition again dismissed the proposal from Muamar Gaddafi for a ceasefire and called for more NATO bombing, despite the mediation efforts of South African President, Jacob Zuma. The National Transitional Council (NTC), which had already declined a similar initiative undertaken last month by delegates in the name of the African Union (AU), reiterated their demand that the Libyan leader leave power and the country with his family.

The head of the NTC, Mustafa Abdel Jalil, made a point of refusing any proposal for a ceasefire that does not provide for the resignation of the Libyan statesman, his family and his closest collaborators, while a rowdy Benghazi crowd booed the meeting last night between Zuma and Gaddafi.

The position of the opponents, whose terrorist insurgency, the NTC, since Monday has started to be called the National Liberation Army (NLA), produced itself in moments when Zuma announced that Gaddafi will accept the plan proposed by the AU for a cessation of hostilities.

"He is prepared to implement the proposal from the AU to give the Libyan people the opportunity to solve their problems by themselves," said the South African president by pointing out that this includes the end of NATO airstrikes.

Libyan state television showed Gaddafi receiving Zuma in what was the first public activity of the leader since May 11, when he was seen meeting with tribal chiefs. But the opposition, in turn, was reluctant to speak with the South African leader.

Zuma denied that he had traveled to the capital to discuss an "exit strategy" for Gaddafi, and emphasized his condemnation of the air attacks by the North Atlantic Treaty Organization (NATO) because they "undermine peace efforts."

The leaders of the NTC are betting on more NATO military pressure on the government in Tripoli and explained that the decision to "temporarily" designate its military as the NLA seeks to "to better define the growing professionalism and efforts for military discipline."

Meanwhile the rebels have continued fighting in areas in the west of the country and around the oil regions of Ajdabiya and Brega, but without any glimpse of a turn in land actions.