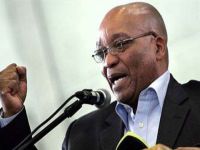 Talks will be held with Al Gaddafi on the proposed cease-fire. Zuma arrives in Libya to mediate in the armed conflict. A first attempt at mediation of the AU failed on 11 April.

The president of South Africa, Jacob Zuma, arrived Monday in Tripoli to search again for a solution to the armed conflict in Libya. The president will meet with the leader Muammar Al Gaddafi in which talks about the proposed ceasefire and the delivery of aid to people affected by the fighting will take place.

In his second visit to the country in conflict, Zuma was greeted by Libyan Prime Minister Baghdadi Mamudi at Tripoli airport, where a group of children chanted "We want Al Gaddafi" and waved green flags and photographs of Colonel Gaddafi.

The TeleSUR envoy in Tripoli, Rolando Segura, said through his account on twitter that after his arrival in Libya, Jacob Zuma condemned the bombings perpetrated by the North Atlantic Treaty Organization (NATO).

"South African President Jacob Zuma, condemned today (Monday) the bombing of Libya by NATO and reiterated support by the African Union of efforts for a negotiated solution," Safer wrote in the network.

On Monday, the South African president is scheduled to meet with Al Gaddafi to find "ways of peace" to end the armed conflict between the regime in Tripoli with the rebels ongoing since late last February, and which have intensified after intensive aerial bombardment by NATO.

According to the South African government, the objectives of Zuma's visit include the negotiation of an immediate ceasefire, allowing the distribution of humanitarian aid to the population and the implementation of reforms to eliminate the causes of the conflict.

Libyan television said that Zuma will address the implementation of the "road map" of the AU for peace.

The president's visit to Tripoli came after the leaders of the Group of 8 (G-8) reiterated, in France, the only viable solution to the conflict in Libya is the resignation of Libyan leader Muammar Al Gaddafi.

A previous proposal for a ceasefire made by the AU, on April 11th, collapsed following the rejection by the Libyan terrorist rebels and the terrorist North Atlantic Alliance (NATO) because it included a call to let Al Gaddafi remain in power.