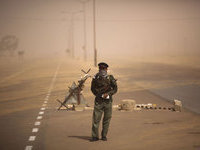 Gaddafi's regime is close to a collapse. On May 11 one of the Russian news agencies spread information according to which the Libyan rebels carried out a successful operation to seize a military base on the outskirts of Tripoli. Members of the regular army took their side, which allowed building on the success and capturing an important area of Souq al-Jumaa.

According to eyewitnesses, for the first time since the beginning of the uprising on February 17 the royal tricolor flags were raised in some quarters of the capital. There was a turning point in the attitude of the residents of Tripoli. The tribe leaders who had been loyal to the Libyan ruler earlier are leaving him. It seems that to the west of Tripoli in the "Berber Triangle" and the mountains of Jabal al-Gharbi the initiative is also moving into the hands of rebel militias. They counterattacked in the city of Nalut near the Tunisian border and in Zintane. The defenders of Misurata are developing their success, advancing toward the city of Zlitenu (160 kilometers from Tripoli).

Coordination at the front between the command of NATO and the military forces of the Transitional National Council (PNC) led to the break in the defensive lines of Gadhafi troops on the eastern front. As a result, the insurgents are again attacking the oil port of Marsa el-Brega, regaining the important objects in Adzhubei and Arbaine.

A day has passed. It would seem that in this time the regime of Gaddafi that is allegedly abandoned by everyone would fail. But what is the result? An officer of the Libyan armed forces Hassan D. clarified the situation in an interview Pravda.ru:

"Some of the journalists were either too lazy to look into the situation, or simply consider the information by CNN and Al Jazeera the ultimate truth.

In fact, it was a carbon copy of the information distributed by the Western propagandists and their counterparts from Arab countries who live at the expense of the oil that they give to corrupt rulers of the West. The same channels in 1999 conducted a similar information war against Russia that at the time was also attacked by the Islamists. The Russian people should know that all these Al-Jazeera and such savored the apartment bombings in Moscow and episodes of destruction of Russian helicopters by bandits with a very specific goal. Today they are conducting the same campaign against us. There was no rebellion in Tripoli. The army and the people overwhelmingly side with the Leader. We all understand that if they win, we will repeat a bitter fate of Iraq and its Sunni triangle.

The shameless lies are distributed regarding the national issues as well. Someone wants it to look like all the Tuareg people were against Muammar Gaddafi. But this is a lie. Everybody knows that four thousand representatives of this people are fighting on our side, and fighting valiantly. All those months of struggle they continually drove the bandits who rose rebellions beyond the border with Tunisia. A day earlier they again tried to move to the offensive, but were repulsed.

With regard to the alleged successes achieved by the rebels in the area of ​​Misurata, it seems that this implies yesterday's attack on the local airport that we have successfully reflected. According to the information from the front lines, the bandits attacked our troops with armored vehicles received from NATO.

The situation in Benghazi area had no major changes. As always, after a series of attacks, the rebels retreated to their original positions, leaving dozens of corpses and a few burned-out tanks in the outskirts of Adzhdabii, which the Western and some Arab media are trying to present as a defeat of Gaddafi's troops.

As for our losses, our opponents exaggerated them. NATO pilots wasted a lot of missiles and bombs on false rubber models of military equipment, as well as the long-decommissioned scrap."

Of course, the Libyan officer is defending the position favorable to his leadership and this is probably also wishful thinking. However, had the change in the sentiments of the residents of Tripolitania really taken place, on May 12 the world would witness the collapse of the regime of Muammar Gaddafi.

However, even the news agency Associated Press acknowledges that there are no successes worth talking about. According to the agency, a concentration of insurgents was observed in the Adzhdabii that could not break through to the south of the town of Marsa el-Brega, which hosts strategically important oil terminals. The same source quotes the rebels complaining that they cannot cope with the forces of al-Gaddafi because the striking range of their weapons is less than 20 kilometers, while that of the opponents is allegedly twice as great.

However, the "revolt in Tripoli" is not the only example of misinformation in a number of news media outlets. Recently many Western journalists have tried to prove that since Gaddafi did not appear in public for 10 days, he was not alive.

However, he disgraced these journalists by meeting with his fellow tribal elders on May 12, proving that the conclusions regarding a drastic change in the attitude of the Libyan people were not true.

The footage from the areas controlled by al-Gaddafi clearly suggests that even women got armed with assault rifles to fight with his opponents. During the armed confrontation Colonel indeed gave weapons from his warehouses to the public.

His opponents are trying to present it as the Colonel's PR and at the same time "voluntary-involuntary mobilization" of the army leadership, and argue that the alleged deviators are being repressed. Yet, it would seem foolish to arm the population that can stab you in the back. If the Colonel was hated as much as some media sources and news agencies are trying to present it, his regime would not have lasted an hour.

However, can we trust the information of the western journalists after they distributed a blatant fable though The Daily Mail that Gaddafi allegedly intimidated the rebels, handing Viagra to his soldiers so that they could rape as many women as possible?