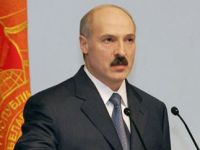 Belarus, is a small republic that borders the western part of Russia and Europe. It almost is not remembered by the world except when it is to be criticized by conservatives in the European Union and the imperialist United States as the "last dictatorship in Europe." Funny thing is that neither the progressive nor the communist movements around the world remember her. There is a void of information on this nation, a vacuum that is only sparsely populated by rightwing propaganda, which nurtures a deep hatred against the regime of egalitarian President Alexander Lukashenko.

Lukashenko was first elected in 1994 by a considerable margin, 80% of the voting population. This is because his proposals were very close to the Soviet socialist system, which enjoyed great popularity among the citizens - as shown in the referendum made on the USSR in 1991, over 70% of the population favored the continuation of the socialist country.

Lukashenko defended a nation oriented to the welfare of the people and not for the enrichment of the bourgeoisie. The most prominent features of the Soviet system were kept, as the full range of services are efficient, modern and oriented to the population (among them, the educational system, health system, transport, security, etc.). , the strong nationalized and state economy, in addition to maintaining part of Soviet culture and traditions.

President Lukashenko firmly sticks to his principles, and has implemented his promises. The result was a huge contrast to other former socialist republics: progress. While Russia, Ukraine and others wallowed in misery after the criminal privatizations of popular wealth (millions of deaths resulting from lack of resources and public infrastructure that would give assistance to citizens), Belarus was developing at a good pace, with the economy growing on average 5% to 10% per annum. The illiteracy rate was maintained at very low levels by Soviet standards (0.3%) and unemployment below 1%. Another interesting index is the difference from the highest to the lowest salary which is only 5 times.

Remarkable is the similarity of the current Belarusian regime with the former Soviet Republic, with the difference that it is not a socialist state altogether. There are several private companies (about 47% of the population is employed by private companies) and, therefore, there is a bourgeois class. However, it is not favored by the government that maintains its goals aimed at the social development of its people.

Because of these characteristics, the Republic of Belarus suffers from the opposition of the imperialist powers, eager for its consumer market and the strength of high-level workers (highly educated and specialized). Every election Lukashenko is challenged by a U.S. puppet candidate who obviously gets a tiny vote.

In the last election (2010), Lukashenko got 79% of the vote, crushing the weak pro-Western opposition. Of course, to the minds of the imperialists it might have been a fraud, but for anyone who looks at the situation of the country without any prejudice, it is obvious that the major great economic developments (in 2010, the purchasing power of the Belarusian people increased 8.7%) and the nation's weight went heavily to the side of Lukashenko. Who in their right mind would vote for pro-Western opposition? Even more obviously not with yet another crisis of liberalism rocking much of the world.

He is largely non-partisan, the overwhelming majority of the members of the Popular Assembly has no party (in 2007, 98 of the 110 lawmakers had no party affiliation). They are members of organizations like trade unions, public and civil society organizations. This peculiarity is very reminiscent of the Cuban political model, since it too is non-partisan.

Therefore, I see in Belarus and Lukashenko, a beacon of resistance to the tyranny of capital and imperialism. A peaceful, progressive, socialist-minded and nationalistic development. A country that prides itself - and rightly so - in their Soviet heritage. A small, forgotten country that is a great example for humanity.