NATO is a fascist Germany reincarnation 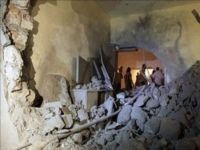 pictured is the murder scene where Ghaddafi's son and 3 grandchildren, all under age 12, were murdered

The U.S.A. and E.U. with their NATO military arm have become stinking, sordid, repulsive jungles of fascism, bringing mass murder wherever they go.

We see western leaders such as Obama, Sarkozy, Cameron and Berlusconi as totally impotent to solve their problems at home so they seek to compensate for that by going on murderous rampages throughout the globe, the latest being Libya.

The U.S., E.U. and NATO have emerged since the dissolution of the Warsaw Pact as the reincarnation of all the evil, fascist and racist tyranny of the German Nazi regime.

In the middle of a huge global economic crisis, record debt, with record unemployment, foreclosures, homelessness...they have launched yet another genocidal, murderous campaign of destruction on Libya.

Citizens go without adequate heath care, without the right to education, large numbers of functionally illiterate, but they continue to cut social programs in a ruse of debt reduction which is in essence just a matter of funds transferred to bankers and the largest military budget in the world, more than all other countries combined.

The UN Human Rights Council was about to recognize the Libyan government for its excellent human rights practices. The text of the recognition said the Ghaddafi government protected "not only political rights, but also economic, educational, social and cultural rights," and praised it for the nation's treatment of religious minorities, and the "human rights training" received by security forces.

Brother Leader Ghaddafi made Libya a nation with the highest per capita income in Africa, thus making her the wealthiest nation on the continent instead of the poorest in the entire world when he took over. Libya has the highest gross domestic product (GDP) at purchasing power parity (PPP) per capita of all of Africa.

Libya has the highest HDI in Africa, literacy went from 10 percent to 90 percent, education is totally free with a paid subsidy anywhere in the world up to the PhD level, life expectancy is the highest in Africa. Everyone has a home, can afford cars and all the necessities of life.

Women have rights, can go to school and get a job, which considerably irked extremist misogynist fundamentalists.

And what is the support inside Libya for these so-called 'Libyan rebels'? The answer is less than 2% of the entire Libyan population. And no wonder, given the standard of life Libyan people have been given. NATO was shocked and discouraged to discover the wide support the leadership has.

The rebel terrorists are misinterpreting verses from the Quran just like all the nut case extremist fundamentalists, in an attempt to justify their so-called jihad and practices which are fundamentally alien to Islam.

Libyan rebels are seen away from corporate cameras chanting 'From Tunisia, Egypt to Libya and on, we will spread Jihad!' Now what are Obama, Sarkozy, Cameron and Berlusconi doing supporting jihadists?

That being the case, their "war on terrorism" is a fake, a fraud and a deception for nothing more than imperialist, neo-colonialist aims at plunder.

The jihadist plan is to create an 'Islamic Emirate in the Maghreb.' Certainly the people of Libya are not interested in descending back into the dark ages of feudalism when their country was the poorest in the entire world.

The plan of the globalists is to return Libya and all of Africa back to where they belong. That is why the USA has already confiscated $32 billion that Libya contributed for an African monetary fund, African non-private central bank and African investment bank.

That money had been earmarked for massive development projects and the starting capital of 45 billion Euros, the former was starting capital for African projects the rest coming from others of the African Union.

Colonel Ghaddafi wants to spread prosperity and independence for all of Africa. This massive African fund would provide health, education and communication projects and infrastructure development all over Africa. It would have kept Africa out of the claws of international bankers.

Meanwhile, western imperialists agreed to steal Libyan frozen assets abroad to provide emergency funding to the terrorist rebels. The Ghaddafi government on Friday called the plan "piracy." Actually it is much more and much worse than piracy...grand theft of the worst and highest proportions by the globalist elites to fund their tools to destroy Libya.

NATO talking head Secretary General Anders Fogh Rasmussen says the regime of Libyan ruler Muammar Gaddafi is nearing an end since pressure is mounting on him to quit power.

"The game is over for Gaddafi. He should realize sooner rather than later that there's no future for him or his regime," Rasmussen was quoted as saying.

Now where in the UN Resolutions does it give NATO fascist imperialists the right to make such a pronouncement in direct violation of UN Resolutions, articles, statements of intent or international law?

Quite the contrary to what the Rasmussen Nazi clown said, it's NATO instead that has no future.

NATO warplanes made an attack that was obviously an assassination attempt, that led to the death of Brother Leader Gaddafi's son, Saif al-Arab, and three of his grandchildren on April 30.

What gives these rogue imperialist countries the right to rob the Libyan people, take their money and give it to those who are trying to destroy Libya?

What gives these rogue imperialist countries the right to try to murder the country's leader and family?

What gives these rogue imperialist countries the right to violate the UN provisions and arm terrorists?

These rogue imperialist countries are morally bankrupt, and self-serving murderous fascist filth.  Rather than "protecting civilians" they are acting globally as mass executioners.

Is it not even necessary to ask what gives these rogue imperialist fascist countries the right to help one side in a civil war, an internal matter of the country. From the very beginning, they have been trying to destroy the leadership of the country with their paid stooges.

One has to ask oneself: is this international community willing to make the same sacrifices as in the Great Patriotic War to fight this most recent scourge or are we going to allow it to go unchecked and unpunished?