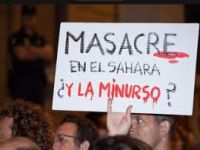 The UNSC has decided to renew the mandate of its mission in Western Sahara for another year. History has repeated itself for years. The member countries meet and decide to extend the operation of this institution, created in 1991 after the ceasefire between Morocco and the Polisario Front, which has in its statutes several established functions.

Namely: Monitor ceasefire; Check the reduction of Moroccan troops in the Territory; monitor the restriction of troops from Morocco and the Polisario to the places described, the parties take steps to secure the release of all prisoners or political prisoners in Western Sahara; Oversee the exchange of prisoners of war (International Committee of the Red Cross); Make an effective repatriation program (High Commissioner for Refugees); identify and register those eligible to vote, organize and ensure the realization of a free and fair election, and publish the results.

However, despite the fact that the military ceasefire holds, there have been incidents of open combat when the Moroccan military has patrolled the streets of Saharan cities and has committed murders of children in The Garhi Najem (Izik Gdeim Camp);  political prisoners are still locked up in prisons (despite the recent releases), repatriations have their faults, of course, despite the census (not accepted by Morocco). 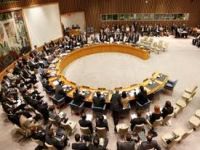 Under these circumstances, MINURSO has never had direct or indirect supervision in the occupied territories of Western Sahara, a function given in the other special missions undertaken by the UN throughout the world. Needless to say, the human rights violations by Morocco against the Saharawi are constant; NGOs have denounced this internationally.

The new resolution passed, which extends until 2012 the work of MINURSO, including the novelty of a call to the parties of the "importance of improving the situation of human rights in Western Sahara and refugee camps of Tindouf (Algeria )". It also calls on Morocco and the Polisario to cooperate with the international community to "develop and implement independent and credible measures to ensure full respect for human rights "

As stated by Mohamed Khadad, a member of the National Secretariat of the Polisario. "We recognize that it is very important that the Council has paid attention to human rights in Western Sahara for the first time." But this little phrase in the new resolution is nothing more than words on paper, because if there are clear human rights violations, why not cure them, and if Morocco says it does not violate Human Rights, why prevent the inclusion of such monitoring, which would prove its claim?...Perhaps because Morocco knows its statement is as false as the intentions of MINURSO.

MINURSO's nearly 500 members should do something when the Saharawi are brutally repressed by the Moroccan police who come into their homes to attack them, scare them or arbitrarily detain them.

But most striking is the inclusion in the official text "welcome to the establishment in Morocco of a National Human Rights Council and its section on the Western Sahara and Morocco's commitment to ensure unhindered access to Human Rights Council (HRC) of the UN." Translated, this is nothing more than giving legitimacy to Morocco to see that there are no violations against the Saharawi. That is, the historical torturer now suddenly becomes, with the approval and recognition of the UN, the actor who can change the situation and report such abuse. 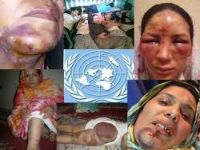 Obviously, the Moroccan floral speech envoys did not wait to get into action. "Morocco has taken steps to reform its Constitution and the renewal of CDH, which will have a representative in Western Sahara and that means that any violation of these rights shall be treated quickly and efficiently with credibility," said Mohamed Lulichki, UN representative. He also stressed that "Morocco is committed to working with United Nations agencies dealing with human rights."

The cynicism of this institution is becoming a patent for this conflict. The "Friends" of the Sahara (Spain, USA, France, Britain and Russia) have been the driving force behind this new resolution that seeks to give a facelift of criticism and obvious facts, every day. Moreover, the repression of Saharawi people continues, daily. Pressure is removed from the need to mention human rights in Morocco but instead trust comes in to fix the problems. With "friendly" countries like these, the Saharawi do not need enemies. 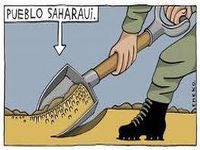 Once more it demonstrates the tremendous power of Morocco in the international community. Again, with the complicity of Spain, of course. Again, the Saharawi remain repressed, Moroccans justify their actions by saying they are terrorists, criminals or drunks and drug addicts. And once again the UN cars still parked in the five-star hotels built specifically for them in Laayoune and organizing parties and activities of dubious reputation. Once again: The Sahara is still fighting! For how long?

Read the original in: