Lifting state of emergency does not save Syria from Islamists 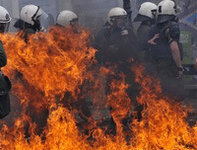 The riots in Syria continue. They have already claimed hundreds of lives. Bashar Assad, the sitting Syrian President, described the events in his country as an Islamist mutiny. Assad is trying to resort to carrots and sticks policy to improve the situation. Assad's military men brutally suppress the riots with the use of fire arms. As for carrots, on April 21 Assad canceled the state of emergency regime, which had been in effect since 1963. The administration of the city of Homs, where the riots are especially strong, has been replaced too.

The Syrian opposition is not going to lay down their arms yet. Syrian opposition activist Haysem al-Malih stated that Assad's order to lift the state of emergency in the country was nothing but a sham initiative. The decision, the activist added, does not stipulate the introduction of independent court system, nor does it retain the tyranny of special services.

It looks like Bashar Assad will not be able to please his opposition, no matter how hard he may try to do it. The leaders of the opposition movement claim that the people of Syria have entirely lost their confidence in the authorities.

Yevgeny Satanovsky, the President of the Institute for the Middle East, said in an interview with Pravda.Ru that Bashar Assad was only giving promises to his people.

"They have canceled the state of emergency, but it only happened by word of mouth. Assad's military men remained just as active as they were before. As for Assad's actions, including his promises to conduct reforms, the Syrian president is simply trying to avoid the negative development of the situation in the worst way. He knows what happened to Mubarak and Hussein."

"Who wants to topple Assad?"

"The Islamists do in the first place. The Saudis want him to step down - this is how they thank for the events in Lebanon and this is how they act against Iran. Syria is Iran's only ally. Turkey also plays an important role at this point. Turkish officials stated that Assad should not use force against rioters. There are moderate Islamists in the Turkish authorities, so it is goof for the country to protect such activists in Syria.

"But Saudi Arabia was funding Bashar Assad. Is there a point for Saudi Arabia to orchestrate riots in Syria if they already had Syria under control to a certain extent?"

"That influence was not bigger than that of Iran. Iran was also funding Assad's regime. Unlike many Arab states, Syria does not have large oil and gas reserves. The country had to live on something, and Assad was raising loans with two absolutely different clients. He was trying to sit between to chairs, but he failed, of course. He wanted to play the role of a smart agent between those two clients, but it just so happens that the two clients fight with each other and can destroy him too."

"What role does the West play in these events?"

"A very big one. However, America's role is not really important here. Syria is a former colony of France. It goes without saying that France is trying to compete with other countries, especially with the USA, as far as its former colonies are concerned. The USA often exercises its influence through Saudi Arabia, whereas France used Qatar for the purpose."

"How stable is Assad's regime?"

"It's stable enough. The army supports him, and this is the most important thing. It seems that military men are going to stand up for him firmly."

"But Assad has serious weak points - the Kurdish or the Druze issues, for instance."

"As for the Kurds, their possibilities for struggle against Assad are very limited. First and foremost, all other Syrian nationals dislike them. Secondly, most Kurds have obtained citizenship. Up to 100,000 people still don't have it, but they can not do anything really. As for the Druze, there are the pro-Syrian and the pro-Israeli parties among them, especially among the Lebanese Druze. Both Israel and Syria have been trying to exert influence on them. However, the majority of the Syrian Druze are waiting for the moment. Their leaders realize that if Assad is toppled now, it may lead to many serious problems."

"What is going to happen in Syria if Assad loses the fight?"

"There is no country of the Arab world that is secured against the change of political regime now. If Assad's regime collapses, Syria will split on the base of national and religious principles. Minorities will suffer most at this point, especially the Christians. Just remember what happened in Palestine after Hamas came to power there. Where is their large Christian community now?"