Nothing "humanitarian" about the war against Libya 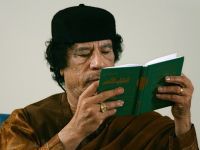 Since the 1990s in particular, and even before, the world has been slipping into a New Dark Ages, a time of lawlessness, barbarism, mass genocide and imperialism. As we find ourselves in the year 2011, there is a fork in the road.  Either the world will slip into total barbaric savagery and darkness or it will choose truth and peace. More people are waking up, but is it too little, too late?

Never before has the term Evil Empire been more appropriate. From the Greek play, Quem deus vult perdere, dementat prius--the saying, "Whom the gods would destroy, they first make mad."

There is no better display of madness than that of western leadership: Obama, Sarkozy and Cameron, along with their military and their talking head, Hellary Clinton, the obsolete NATO Nazi American Terrorist Organization, currently attacking the free, prosperous and democratic Libyan Jamahiriya.

Their stated casus belli for starting a war: protecting civilians. Speak about insane, how are you protecting civilians when you are dropping depleted uranium and forever contaminating and ruining the environment for generations? Sarkozy, Obama and Cameron, as well as their spokescreeps, should shut up because their lies are quite transparent.

Too numerous to mention are all the international laws broken by the use of these dirty weapons. They are spreading disease and contamination not only where they are used, but also by weather patterns, throughout the entire world.

"Depleted uranium tipped missiles fit the description of a dirty bomb in every way... I would say that it is the perfect weapon for killing lots of people."

Nor do they care about their own military: Henry Kissinger: "Military men are just dumb, stupid, animals to be used as pawns in Foreign Policy." Perhaps someone should get in front of the soulless pawns that fly those planes and shoot off those missles and tell them that, before they push those buttons and manipulate those joysticks.

The ruse that "unarmed innocent civilians" were being killed by Libyan government forces has long fallen by the wayside, as it's more than obvious this has been an armed insurrection planned well in advance and outside of the country. Even the New York Times published an article describing how various American based organizations have been engaging in subversion against and within target countries. 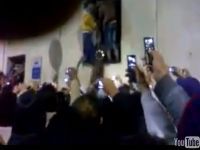 These "rebels" are heavily armed with the latest weapons, coming from outside of the country. They are also seen flashing their mobile phones with cameras to record and boast of their own personal savagery as they execute patriotic soldiers defending their country and innocent civilians.

Do the people at home in these western countries know what kind of inhuman refuse their military are helping, protecting and defending? Nothing more than terrorists, many part of Al Qaeda, the same ones killing their own soldiers in Iraq and Afghanistan. Your taxes at work to kill your own sons.

Already it is reported that weapons seized from the Libyan Army are being readied for terrorist actions in the region and elsewhere. 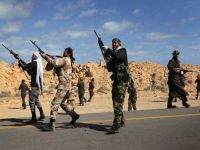 These savage "rebels" have been executing pro-Gaddafi soldiers in cold blood who surrender. The camera footage taken shows "rebels" in action as the captured are being blindfolded, hog-tied, beat, executed, hung, beheaded, set on fire and their bodies subsequently mutiliated. In one instance, a soldier had his heart cut out of his chest when he told them that his "heart is for Gaddafi" and the "rebel" terrorist literally took a bite out of the man's heart.

This has been happening to anyone they suspect is sympathetic to the legitimate government of the country. Many foreign workers have also been attacked by the terrorists, they are a group highly in peril.

This is the truth about the kind of creatures that make up the "recognised" government of Libya (recognised by France, Portugal and Italy), a terrorist gang in Benghazi, the west's idea of a legitimate government for Libya. 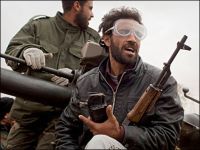 These terrorists have shown themselves as violent sadists, quite in the fashion of their predecessors in Afghanistan, Bosnia, Kosovo, Nagorno Karabakh and Chechnya. All were funded, trained and armed by the USA. They are comprised of Al Qaeda and Islamic extremists, along with gangs of expatriate Libyans who are on the payroll of the CIA. MI6. and French Intelligence.

These incidents are completely ignored and deliberately overlooked in the imperialist media. After all, these victims are only loyal soldiers defending their country. And the corporate media attempts to show the terrorists as "freedom fighters" interviewing them as though they were "normal" human beings.

The imperialist media does nothing but promote the war pigs' agenda. Truth is an alien concept to them.

It is also worthy to notice that these terrorist "rebels" are horribly racist and enjoy attacking, torturing and executing Libyan blacks they capture. The terrorists are continually on the hunt for non-white Libyans, none are safe.

To justify their racist hatred, they continually and wrongly assert that all the blacks in Libya and the Libyan Army are mercenaries because they are not white. They cannot accept that there are over 500,000 black African Libyans.

No black Libyan is safe in the presence of these terrorists. Perhaps some civil rights groups and blacks in the military in the U.S. should make note of this before giving any support to the country's adventures towards global economic and military domination.

There is nothing "humanitarian" about the war against Libya. It is nothing more than an attempt to re-establish colonialism through regime change. They insist that Ghaddafi must go.

NO! Obama, Sarkozy and Cameron are the ones that should go. They should be prosecuted by the citizens of their own country, if not by an international war crimes tribunal.