The tragic fate of Baghdad Museum 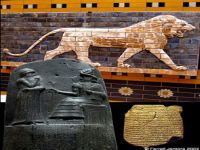 For the British, the famous museum near the Euphrates was an extension of the Victoria and Albert Museum in London, which retains part of Islamic culture and evokes the heritage of the Middle East. It was even visited in the early twentieth century by the novelist Agatha Christy, who was interested in the ruins of Mesopotamia and the Hanging Gardens of Babylon.

Today all this has disappeared and only the memory remains of the creations, mostly carvings and sculptures, which were left by the primary creators from the times of the Sumerians, Akkadians, Assyrians and Hittites, almost 3,000 years BC. This has been one of the consequences of the invasion and conquest of Iraq by the Empire a few years ago. Not at all surprisingly efficient, they left nothing of value except the winged lions of granite because they weigh 25 tons each. Pieces that are real jewels of the most remote antiquity have begun to appear in Los Angeles and New York.

The museum occupies an area of ​​four or five blocks near the center of the city, divided into large halls for exhibiting historical items accumulated over the years, as was the case with a copy of the Code of Hammurabi, a Babylonian legal guide of litigation and regulations, engraved on a stela (pillar) of diorite, eight feet tall.

Treasures of the ancient Persians were also exhibited, and a vision of the Islamic culture that included 20,000 clay tablets with the story of what happened throughout the centuries. With the loss and disperal of this precious heritage, we lose an important part of the historical memory of humanity and the means by which it was collected.

No wonder the American invaders committed this crime, since England did the same with the treasuries of the Greek culture in the early twentieth century. They not only stole the Parthenon frieze, but they also sold them to the British government, which now refuses to return them. To make matters worse, both nations happen to claim being the most cultured in the world.

No precedent exists of a comprehensive theft of a large museum, only of isolated pieces, as in the case of Napoleon and the chariot of horses in the Piazza San Marco in Venice and some Egyptian pieces such as the Rosetta Stone.

Most of the museums of the developed countries have been formed as a result of theft and looting, including Germany, France, England and the United States. A typical case is the appropriation of more than 5,000 pieces from the secret city of Machu Pichu in Peru, by Hiram Bingham, donated to the University of Pennsylvania, an event that helped him win a seat as a Senator in the early twentieth century.

Today the University refuses to return most of these capital assets to Peru. Another similar case is the Museum of Man in Paris, a true showcase of the colonial conquests by that country. A little-known case is that of Spain, which wiped out all Cuban paperwork and documentation when the place was given to the United States. It can be said that our historical memory is in the Archives of Madrid.

However, ¨ ¨ the worst is the criminal looting of Baghdad. This is not about one country, however important it may be, but the origin of writing and transmission of thought, the first man's cultural expressions. In this perspective, culture and history are sacred things that one must learn to respect and protect and not to engage in plunder during a military action as in Iraq, where they used unidentified closed trucks protected by mercenaries dressed in black, who took their precious cargo through a port in the south.

This has to violate the holy grail of universal knowledge, putting it into the hands of criminal merchants. Some day they will be recovered and returned to the suffering people where these precious testimonies originated.