NATO claims stupidity in Libya, not knowing terrorists have tanks

Deputy commander of operations in Libya says the organization did not know "rebels" had military tanks. 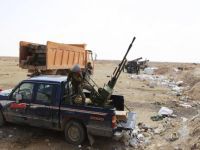 The North Atlantic Treaty Organization (NATO) acknowledged on Friday having mistakenly bombed tanks used by insurgents in Ajdabiya, but refused to apologise for the attack.

According to the deputy commander of the NATO operation in Libya, Russell Harding, the organization did not know that the rebels had military tanks, because in the past only the forces loyal to the Libyan leader, Muammar Gaddafi, used vehicles.

"I will not apologize," said Harding. "The situation remains extremely fluid, and even then we had no information that insurgents were using tanks."

Hours later, the secretary general of NATO, Anders Fogh Rasmussen, lamented "deeply" the death of at least five rebels in the attack by the organization. Rasmussen called the episode an "unfortunate incident" but did not offer an apology.

The mistaken NATO attack happened on Thursday, on the road linking the cities of Brega and Ajdabiya in eastern Libya. One of the leaders of the rebel forces in Benghazi, Abdel Fattah Younes, said he would "get answers" about what happened.

"We're not questioning the intention of NATO, because they must be here to help and assist civilians, but we would like to get some answers," he said.

On Thursday, the Turkish Prime Minister Recep Tayyip Erdogan proposed a statement of goals for peace in Libya at the same time calling for forces loyal to Kadhafi to withdraw on behalf of democratic transition in the country.

According to the Guardian newspaper, Erdogan said that the measures and coordination of the plan would be discussed at a meeting to evaluate and guide the international community's intervention in Libya. The meeting was expected to happen in Qatar next week.

This week, Turkey dialogued with envoys of the government of Gaddafi and Libyan opposition representatives. The Turkish prime minister assured the opposition that Turkey supports their demands, following recent protests by some members of the opposition against Turkey in Libya.

Turkey initially received with fear the idea of military intervention in Libya, but now supports a no-fly zone to "protect civilians." Moreover, the Turkish government has volunteered to lead relief efforts in Libya.

The British Foreign Ministry said that representatives of European powers, U.S. allies in the Middle East, Arab League and representatives of international organizations will be at the meeting in Doha, Qatar, scheduled for next Wednesday. The group also discussed the Libya issue during a meeting in London last week.

(Ed. Note: What? You didn't know they were heavily armed and had tanks, RPGs and assault weapons? This is a very bad joke, a sick joke. This just goes to show that the so-called "international community" both does not know what they're doing and who they are supporting in general.

The leadership in particular does know, and is lying to the rest because they do know that they are supporting heavily armed Al Qaeda terrorists in committing murder and destruction upon the country. Is anyone fooled these days by "weapons of mass destruction" or any of their other countless lies we've exposed?

Too bad the idea of an apology even came up, they would never dream of an apology to the real, genuine innocent Libyan civilians they've killed in the name of support for terrorists and mercentaries of the CIA and other intelligence services.)