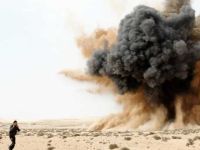 The North Atlantic Treaty Organization (NATO) announced on Saturday (02) the verification of information on the death of several civilians and rebels after an airstrike by coalition aircraft against the Libyan city of Brega.

Amid the reports of hundreds of casualties from the bombing of NATO since March 19 last, sources at the military headquarters in Brussels said they will prove the veracity of the reports, without referring to field research.

A correspondent for Reuters, quoted by the London newspaper The Independent, reported at least four vehicles on fire, including an ambulance, near the entrance to the Libyan oil city. Opponents to the forces of leader Muammar Gaddafi said about 14 people may have died after the air strike late on Friday.

NATO always makes like they are concerned by reports of civilian casualties. The mission's alleged purpose is to protect civilians and civilian areas from attacks, assured the spokesman, Oana Lungescu, a few days after the alliance took command of military operations against Libya.

The aggressor planes bombed the country during new raids on Friday and also several military and civilian targets in the cities of Khoms, Tripoli, Mesrata and other locations in the Arab Southwest, Libyan state television said.

The Apostolic Vicar in Libya, Giovanni Innocenzo Martinelli, denounced the deaths this week of at least 40 civilians because of armed attacks by NATO. Martinelli condemned the so-called "humanitarian attacks" that killed dozens of civilians in some communities in Tripoli, he further underlined.

The Vatican's civil servant accused the foreign coalition of the Wednesday attack on the Mizda hospital and the population, situated about 145 kilometers southwest of Tripoli.

For analyst Bill Van Auken, the report of the Vatican representative in Libya represents a hard blow to attempts by Washington and its NATO allies, with support from Western media, to show the bombings as humanitarian actions in defense of the population.

On the TV channel, Euronews, Van Auken said a bombing at an ammunition depot in Mizda caused damage to a hospital and nearby houses and injured at least 13 civilians.

Although attacks appear to be selective, Martinelli told the Fides news agency that targets are in the midst of civilian neighborhoods, so that the people of the area are also affected.

Canadian General, Charles Bouchard, head of NATO command in Libya, claimed that the alliance operates under "strict rules of engagement" and by the legal mandate of the United Nations.