The No-Fly fraud against Libya

In addition to the fraud that engulfed the foreign intervention in Libya, Brazil entered the fraud by failure "to oppose" the aggression led by the U.S. 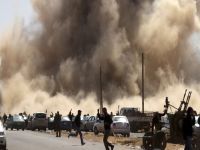 "Gaddafi controls resources by Libyans in Libya and for Libyans. When he came to power, only ten per cent of the population could read and write. Today, it is about a 90 percent literacy rate. Women today have rights and can go to school and get a job. Quality of life is about 100 times better than existed under the rule of King Idris I ".

These deadly raids by the great powers into Libya compose an exquisite farce that crystallizes a dangerous precedent with many facets. The most blatant and purposeful thing is the convenience of an unfinished resolution of the UN Security Council, thanks to which aircraft are bombing and missiles are being fired in violation of the terms of the Resolution, operating a real foreign intervention, aiming to overthrow Muammar Gaddafi and using seditious groups as their troops on the ground.

It is a calculated fraud that was only possible due to the collaboration and the failure of countries that clearly knew the fallacy of this utter deception called a no-fly zone. They knew, but preferred to maintain a distance, sealing the aggression.

The UN resolution is a masterpiece of cynicism directed at wide open breaches that allow for manipulations to the whims of the aggressors, which say in passing, at least with regard to France, it was only a bureaucratic stopgap. Their planes were already acting even before the formalization of the carte blanche.

The concrete result of this collusion is the recomposition of the rebel groups, which would have been defeated on Saturday, the day that the foreign raids began. It cannot be said that this is an atypical offensive predestined to a victory in the dreams of the so-called "coalition." However, whatever happens, Libya will be totally undermined by these episodes, making it vulnerable to the satiety of the colonial powers.

This fraud brings on many reflections. What country can feel secure in the face of such a farcical framework? All that was claimed was that an international force would be needed to protect civilians from attacks by the regular army. The first lie is that there there are no civilians in the streets or squares, as happened in Egypt. There are, however, heavily armed groups in the exercise of attacks with heavy weapons. Groups that have in their ranks many military defectors, including artillery.

This the mercenary media could not hide, try as they did. Instead, all the time the "rebels" are displayed shooting at random as if they had lots of ammunition to spare.

Worse yet is the actual dishonest, deceitful statute that served the Security Council. International law must presume that the right of interference in conflicts between countries or for peacekeeping missions, has to be requested by constituted governments. But not in the case of Libya.

Murders in Gaza, nothing was done

There was, yes, that event, the killing and slaughter promoted in Gaza by Israeli aircraft and rockets from the 28th of December 2008 to January 18, 2009, 21 days of atrocities, with a total of 1,412 Palestinians dead. In this long period, the Security Council drooled and the U.S. used its veto to prevent any act that would curb the crazed criminal behavior of Israel. The garbage can of Jerusalem, by the way, collects dozens of UN resolutions on all levels, and not a soul appears to call this rogue government to task. And the media does not speak of it.

The fraud that is providing an opportunity for indiscriminate killings in Libya also notes with emphasis on the failure of the institution of national sovereignty. It would be highly irresponsible to assume that bombing another country, in order to encourage, support and favor insurgents has any moral aim.

In this specific case, more lucid authorities were already anticipating the intentions of Western powers to deceitfully take advantage of the wave of discontent in some Arab countries to target those who were in the best position to achieve success in far-reaching social projects: Gaddafi reversed illiteracy rates - to 90% from 10%, recorded the highest HDI in Africa, (0.755, in 53rd place in the world, comparable to 0.699 in Brazil, 73rd) and is in a modernization process that provides for substantial investment, including construction of a million houses in ten years for a total population of 6.5 million.

Gaddafi of Libya has managed to balance the atavistic tribal rivalries and even offered refuge to a million and a half thousand Egyptians and other Africans. With the sedition of Benghazi, wounds were rekindled from some tribes of the region of Cyrenaica, one of three provinces.

Obama disappointed even his co-religionists

The fraud that facilitated the aggression against Libya happened when Barack Obama visited Latin America, with an eye on oil from the Brazilian pre-salt and a transformation from China as the main buyer from Brazil, Chile and Argentina. That visit was so ludicrous that, after that, the government announced the import of alcohol from the United States, something never thought of, but caused by the greed of Brazilian sugar mills.

The invisible puppet dictatorship that he wants makes him create sensational facts to restore the discolored image, and he is taking such desperate steps that they even managed to irritate the allies: in general, decisions of this nature should be first submitted to Congress.

Representative Dennis Kucinich, from his party, raised the possibility of petitioning for his impeachment because of his irresponsible attitude in all respects. With the support also of Democrats Barbara Lee, Mike Honda, Lynn Woolsey and Raul Grijalva he accused Obama of "plunging the United States again into a war we cannot fund." The group went further to affirm that the dazzled president "entered a war hastily with a limited knowledge of the situation on the ground and was without an exit strategy."

Even in the U.S. media there was criticism to this order of aggression. Political analyst Michael Walzer asked, "Is the goal to rescue a failed rebellion, that Western troops will do what the rebels could not do alone: ​​to overthrow Gaddafi? Or is it just to keep them fighting as long as possible, with the hope that the rebellion could flare up and convince Libyans themselves to finally get rid of Gaddafi? Or is it just to reach a ceasefire? It seems that none of the attackers are able to answer these questions."

Despite the willingness of some journalists to go along, the one who actually ordered the first heavy deployment of missiles was Obama. Except his attitude alone was so despicable that he tries to make one believe that he is capable of something special - just another common buffoon who does not have the minimum of stuffing.

Nicolas Sarkozy has already experienced a bitter succession of defeats in local elections and is unlikely to be reelected, as the polls report today. He appeals and attempts to rekindle the French center and the right wing, the old colonial taste, amid corruption scandals, cronyism and loss of social rights. It is not unlike the attitude of the British premier, David Cameron, who on Saturday was the target of one of the largest street demonstrations in London in a protest against budget cuts that will affect the lives of Englishmen.

The hesitation that can be expensive to Brazil

This fraud also infected Brazilian foreign policy, which in recent years had rescued the dream started with Quadros, João Goulart, Arinos and Santiago Dantas. Thanks to an overt prioritization of our interests, Brazil had been a reference point along with its partners in BRIC countries (Russia, India and China).

It is possible only to attribute the hesitation in the Security Council to the inexperience and incompetence of President Rousseff.  Her chancellor, Antonio Patriota, is a mediocre diplomat, who is straight out of an "orphanage."

Along with this decision, Brazil also entered into the battery of maneuvers against Iran's government, embarking on the old tactic of waving the question of "human rights" as an excuse to forge external intervention in that country. Dilma and the government cannot fall into a snare.

Why don't they also vote for an investigation into the barbaric violations at Guantanamo Bay, that Obama himself has promised to discontinue and then dropped entirely? And in Iraq? AND perverse treatment accorded to Palestinians and Arabs in general by the political police of Israel? Can they be allowed to barbarize? Brazil does nothing against such evils, despite the accumulation of complaints?

Besides this morally untenable aggression against Libya, the world that believes in the sovereignty of the people is dangerously vulnerable. We have already experienced a similar threat in 1964, only it wasn't necessary to support the U.S. fleet stationed in front of our coastline. Here, they just went ahead and overthrew the government in the cry.