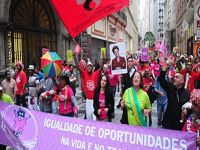 The Confederation of Women of Brazil - CMB - demands the immediate withdrawal of troops from Libya and the end of the imperialist assault, and furthermore repudiates this crime against humanity mistakenly endorsed by the UN Security Council, an attitude that denigrates much in this international body. We want the UN to be committed to the Sovereignty and Self-Determination of Peoples. This is an aggression against the sovereignty of Libya in an attempt to subjugate its people and its government to steal their oil.

We have seen this movie before and the media cartels financed by warmongers manipulating information, lying to justify criminal actions like this that resulted in the killing of thousands of innocent people and serves to sustain the oil cartels, real rulers of the U.S.

The plane shot down on March 19 in Benghazi, that the "rebels" recognized as their own, reported on by 'The Guardian', through their correspondent, Chris McGreal, was used by imperialism as an excuse to disrespect the sovereignty of Libya. They bombed Tripoli and other cities. The imperialist press reported and spread this episode as proof that the Libyan government did not accept the decision of the Security Council of the UN for a no-fly zone.

The "National Front for the Salvation of Libya," which has "Libyan" in name only, has an office in Washington and commands an army of mercenaries, strategically positioned at the border of Egypt, financed by the CIA since 1981.

Libya has the highest Human Development Index, HDI, of all the countries of Africa. Even with the economic blockade imposed on the country, the Libyan government under the leadership of Muammar Gaddafi guarantees free healthcare and education, housing, food and fuel available to everyone. He gained a literacy rate of 90% and women, who once lived excluded, won the right to education and the right to work that was previously forbidden.

In the government previous to Gaddafi, large quantities of Libyan oil were stolen by the United States. The literacy rate was only 9%. By taking charge of the nation, Qaddafi nationalized the petroleum industry, requiring the withdrawal of American and British military bases in the country. Free healthcare and education have been provided for all with massive participation of women in society. This is unacceptable to the idle parasite Empire that survives at the expense of human hunger and misery, and the labor and wealth that do not belong to it.

In Libya, there were no protests as occurred in Tunisia, Egypt, Saudi Arabia and Bahrain. Nor was there an "insurgency." What happened was a criminal act of an armed mercenary army funded by the CIA with support of the U.S., England and NATO to try to recover the position they occupied in oil exploration before the Libyan Government of Colonel Gaddafi.

Libya has the largest oil reserves in Africa with 44 billion barrels, and is among the 10 richest countries in the world with an oil production per day from 1.8 million barrels of exceptionally high quality.

After the proven fallacy invented by imperialism of the existence of weapons of mass destruction in Iraq to justify the invasion and murder of its President, Saddam Hussein, other countries are now aware and vigilant to ensure the defense of their territory and sovereignty.

Russia monitors the region via satellite and has declared that the aerial bombardment by the Libyan army against the cities of Benghazi and Tripoli never happened as claimed by imperialist media. This information exposes the lies produced by the imperialist media.

At this point we proclaim our total solidarity and support to the people and government of Libya, the Great Jamahiriya (state of the masses) and in the defense of the sovereignty and self determination of all the peoples in the world!

And this time, we also ask Brazilian women to call for a permanent state of alert in defense of our oil from PRE-SALT!