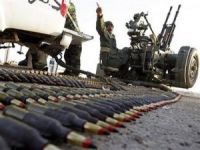 The accusation is serious but unfortunately true: Barack Obama has signed a secret document* allowing covert CIA operations in Libya against the Government of Muamar Al-Qathafi and in breach of international law. David Cameron is thinking about arming the Benghazi terrorists, who have links to Al-Qaeda. We present the proof - these men are traitors

If someone told you that your government was spending hundreds of millions of dollars in funding Al-Qaeda terrorists who had fought active campaigns against the troops of your own country, how would you feel and what would you do? If someone told you that you could not have an operation because the National Health Service did not have the funds, then promptly spent two million pounds in two hours attacking the authorities of a sovereign nation who were not targeting civilians, but indeed Al-Qaeda terrorists, how would you feel?

Well, people of the United States of America and the United Kingdom, I have some very serious and sad news for you. For the people of the USA, your President, Barack Obama, has * according to Sky News, which has just broken the news, signed a secret document several weeks ago giving the CIA permission for covert operations inside Libya in support of the Benghazi based "rebels", some of whom fought in Afghanistan against British and US troops. Your sons may have been killed by these Islamist fanatics who your President is actively funding and supporting, and in so doing, breaking international law.

How would you feel, people of the USA and UK, if I were to present to you proof that the Benghazi-based "rebels" are in fact not innocent civilians being attacked by Colonel Al-Qathafi's forces, but indeed are hardened terrorists, criminals who have fought in Afghanistan and in Iraq, in many cases against your boys? 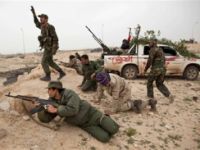 Muammar Al-Qathafi saw this coming long ago and restricted his more sophisticated weaponry to the West of his country, where he is genuinely supported by at least 80% of his people.

The President of the United States of America and the Prime Minister of the United Kingdom are not only criminals who have breached international law in aiding a rebel group of terrorists against a sovereign state, based upon manipulation of the truth, inventions and barefaced blatant lies, they are also traitors, supporting those who have fought active military campaigns against their own troops in Afghanistan and Iraq.

Did they know for instance, that a large number of suicide bombers used against US and UK troops in Iraq came from Eastern Libya? Has anyone noticed the number of times they can be heard saying "Allahu Akhbar", and has anyone noticed practically all of them sport the Islamic beard? Does anyone know that in Libya they are referred to as "the bearded ones" and that they hate Muammar Al-Qathafi because he has called the Islamic veil "a tent", because he has spoken out against the stoning of women, because he has spoken out against the death penalty for homosexuals? 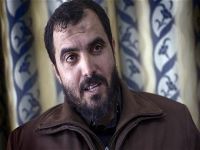 Who are they supporting? Why, none other than the gentleman in the photo. Name: Abdel-Hakim al-Hasidi. Claim to fame? Terrorist, Al-Qaeda. In an interview with the Italian newspaper Il Sole 24 Ore, he affirmed that he had recruited men from Eastern Libya to fight against the American and British boys in Afganistan, and admitted further that some of these men were now drafted back in Libya by Al-Qaeda to fight against the government forces of Al-Qathafi.

So, not only are Obama and Cameron aiding terrorists, they are planning to arm them - if they have not already - and they have lied to their people, claiming these are innocent civilians being attacked. Look at the images on TV. Are these innocent and unarmed civilians?

Do the people of the USA and UK back their leaders in aiding and arming someone who said in the interview: "members of al-Qaeda are also good Muslims and are fighting against the invader"? For sure, Obama and Cameron feel comfortable with it. After all, a traitor would, wouldn't he?

As if this was not enough, the Chadian President, Idris Deby Itno, claimed last week that the AQIM (Al Qaeda in the Islamic Maghreb) had seized sophisticated weaponry in Libya, including surface-to-air missiles. What, now, will these be used for? Providing shelter for a children's playground? A phallic statue outside a maternity hospital, maybe?

Or for shooting down a passenger aircraft full of innocent civilians some time in the near future? 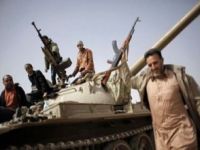 These are the people who President Obama and David Cameron are helping. Once again, they have lied, manipulated the media and created a casus belli where none existed. This time, though, they have climbed into bed not only with terrorists, but with precisely the group which killed thousands of people on 9/11 and committed the horrific atrocities in the London Underground, precisely the group which continues to plan attacks daily against the USA and UK.