Libya: dawn of an era of super-military intervention 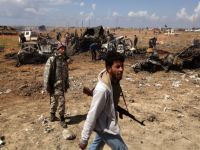 The Americans always create, encourage and finance opposition movements in all countries where it is in their interest to destabilise governments and political systems.

So, not surprisingly, their agents and allies in Muslim countries have encouraged the movement that started the so seemingly accidental, Tunisia. Young people from Islamic countries are dissatisfied with life. They lack opportunities for professional and personal fulfillment. Their freedom is limited, and their dreams crumble in front of a closed society.

In the last 21 days, the New York Times published an article by a 24 year old successful and reputable developer of the Council of Foreign Relations in New York. Matthew C. Klein examined the situation of young Americans, showing that the unemployment situation is similar to that of young people in poor countries, and that their dreams are also limited.

He could have also discussed the disillusionment of the unpaid portion of alienated youth in his country with the government, with Congressional corruption, the indecent behavior of large corporations that have their head on Wall Street and with the bellicosity of their country. The fact that there is an illusion of freedom of the press and periodic elections does not reduce the absolutism of the essential American system. People vote, every four years, the justice system works, although the Supreme Court does not always judge with impartiality. But still, freedom, here as elsewhere, is a market good, a commodity. You have to be able to buy it.

Human rights, proclaimed in lofty statements are also violated in the United States and countries that sing in their chorus. Just remember what goes on at Guantanamo, what was documented at Abu Ghraib, and the conditions which are seen in a naval prison, for the U.S. soldier, Bradley Manning.

The claim that the intervention in Libya is made on behalf of human rights and the protection of civilians is immoral. It is considered unwise even to British MPs, like Rory Stewart, in an article published on the 18th, in the London Review of Books. Stewart is not a leftist.

Deputy for a traditional conservative stronghold in the northwest of England, the parliamentarian reveals knowledge of the subject. He was with British troops in Iraq, and after that, crossed Afghanistan on foot as part of a larger trip from Turkey to Nepal, for 6,000 miles and lasting two years. Although conservative, Stewart considers his country's participation in anti-Islamic crusades an error. He justifies, in part, the intervention in Yugoslavia in the name of protection of a civilian population they pretended was threatened by genocide there - but does not agree with the rest. We reproduce some text of his article, published under the title "Here we go again":

"It seemed doubly unlikely that Britain would ever intervene militarily in country like Libya. Although poor in oil, Afghanistan and Central Asia were seen by many Muslims as objects occupied by infidel crusaders, led by Israel, and in order to deploy military bases or get cheap oil. Any move against Libya - an Arab Muslim country, obsessed in a relentless struggle against colonialism and sweating oil - gave the impression that it would be viewed as an extremely hostile and sinister move, first not only by their own Arab neighbors, but also the developed world and even by Libyans themselves.

Libya does not meet even the criteria of international law as a target for military intervention. Gaddafi is the sovereign power, not the rebels, nor did he practice genocide or ethnic cleansing...

As deputy to the House of Commons, it occurred to me that maybe it's time to remind people that despite the misery of Afghanistan, Britain can still have a constructive role in the world."

At the end of his article, the parliamentarian is pessimistic and gets to the bottom in the exhibition of the pretenses of the colonialists:

"Nothing makes me more aware that the greatest danger is not despair but these unstoppable decisions, almost hyperactive, the feigned sense of moral obligation, fear of rogue states, failed states, of losing our "credibility." This, indeed, makes me fear that we are at the beginning of another decade of military superintervention."

Rory Stewart (born in Hong Kong, to English parents, educated in England) thus confirms the objective of another colonialist movement, again "manu militari" (with a military hand) of the old rulers. Intimidated by the lack of cheap oil, they cling to the past, in search of their security and pride, as owners of the world.

The elite oligarchs of the lecherous imperialist capitalist world no longer make any pretenses of serving the people they rule, they have long distanced themselves from the will of the people. Meanwhile, this collection of thugs, murderers and false accusers meets in London to decide "the future of Libya." Who asked them?

Cameron, Sarkozy and Obama should all go, they have lost all legitimacy. I am sure some polar bears in the Arctic might welcome their presence. It is doubtful they would be welcome anywhere else. But that would hardly be necessary if they were first forced to go before a war crimes tribunal.