Lion of the Sahara 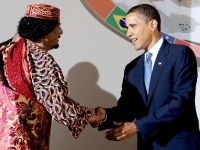 The big question: What happened to justify the sudden, radical and abrupt change of the "masters of the world" against Gaddafi?

Following the conflict in Libya, some private media, national and international, have played with Chávez and Gadhafi photos. That way, world public opinion is being programmed to overwhelmingly reject the conduct of Qaddafi, and this way they seek to ensure that there is also a repudiation of Chavez by presenting him as his "friend."

Not in vain, the English Chancellor suggested that Gaddafi was fleeing to Venezuela and some local journalists have hinted that a child of his and some of his supporters had come to Margarita Island and worse that Cubans were involved in all of this because they have a lot of money saved in Libya.

Paul Wolfowitz, who served as undersecretary of defense of the United States and as World Bank president, architect of the Iraq war, published an open letter to Obama urging him to turn Libya into a "protectorate under NATO control," on behalf of the "international community."

In 2008,, President Bush left allowing the unilateral sanctions imposed against Libya by the United States to lapse, and removing it from the list of "state sponsors of terrorism."

Transnational oil companies rushed on Libya in search of control of the giant deposits of their coveted light oil. The same dogs of war provided weapons, from sophisticated fighter aircraft to assault rifles, machine guns and ammunition. Many boasted of having finally forced Gaddafi to give up his radical positions.

That same year, Gaddafi received a visit from Condoleezza Rice, Secretary of State of the U.S. government. Then all the heads of state of countries that claim to own the planet marched through Tripoli: the British Prime Minister Tony Blair, followed by his replacement Gordon Bown, President of France, Sarkozy, Russian President Vladimir Putin, King Juan Carlos of Spain and Rodriguez Zapatero humbled themselves before him in 2009 to sell 3.5 billion euros in weapons.

Gaddafi became a kind of a "political star" in international circles. He was invited to participate for the first time in the General Assembly of the United Nations, where he was received by President Barak Obama.

He was invited to visit France, Italy and Spain. He was received like the "King of Kings" and the "Lion of the Sahara."

* Political scientist and Internationalist
MSc in Security and Defense