Chavez tries to win over Costa Rica from USA 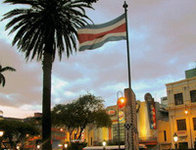 The officials of pro-US Costa Rica fear the aggression by Chavez's closest ally - Nicaragua. Costa Rican cabinet of ministers shared their suspicions to that effect on March 4. According to their statement, in recent days Nicaraguan President Ortega received an insane by the standards of the banana republics sum of money of the unknown origin in the amount of half a billion dollars. He used this money to purchase facilities in profitable sectors of the economy and the media in Costa Rica.

In this regard, the Costa Rican government asked the world community to verify the origin of the money, fearing that Ortega got involved with the Mafia which is trying to establish control over the country through his hands.

Since these two neighbors have gained independence from Spain in the middle of the 19th century, the relations between them left much to be desired. Costa Rica has been traditionally accusing Nicaragua regardless of its ruling government in the attempts to annex it, or at least profit at the expense of the rich neighbor to the south.

The relations between the two countries have noticeably cooled off a year ago, after the departure of President Oscar Aries who, unexpectedly for many, made friends with the Cuban Castro brothers, and the arrival of Laura Chinchila who the leftist call the right-hand supporter of the American capitalists.

Over the last six months the situation in general has become quite intense. In the beginning of November of 2010 one of the units of the army of Nicaragua "by mistake" invaded the territory of Costa Rica. Ortega's fighters, without encountering any resistance, have entered the neighboring country almost three miles deep and occupied Isla Calero on the San Juan River. According to publications of the Costa Rican newspaper La Nacion, Nicaraguans have moved in a wrong direction referring the incorrectly drawn Google Maps.

Evidently, the government of Costa Rica suspected the neighbors in the purposeful violation of the border and display of force. Since time immemorial the island belonged to Costa Rica, which is obvious from the appropriate boundary markers.

Nonetheless, international mediators represented by the Secretary General of the Organization of American States (OAS) Jose Miguel Insulza had to intervene. The recent statements made by the Costa Rican politicians prove that the issues in relations with Nicaragua are very serious. The tension is caused not just by Ortega's desire to profit at the expense of the rich southern neighbor, as some may think.

Costa Rica is one of the countries Chavez has laid his eye on with his opposition to the U.S. At times it seems that it is firmly sided with the Bolivarians. However, under Obama the United States remembered its neglected Latin American "garden" and rushed to eliminate the "Chavez's weeds" that proliferated during the Bush administration. In 2010, Costa Rica, one of the richest countries in the region, was returned to the group of the US-oriented countries.

It is no accident that the cries about the attempts to seize control by the Mafia came at the time when the head of the Department of State Hillary Clinton was completing her tour of the region. It is also noteworthy that she did pay a visit to Costa Rica during her tour. Given that the Americans have made significant investment in it, Washington is clearly not going to leave it uncontrolled. Costa Rica is not a conventional banana republic. The country receives only six percent of its revenue from the export of fruit and coffee.

Costa Rica deserves attention as a unique country. There are not that many countries in the world that have no army. The situation is clear with the dwarf countries such as Andorra and San Marino that do not have global interests. It is also understandable for the majority of island countries of the South Pacific that have no natural resources.

However, the "unarmed" Costa Rica looks rather strange on the background of an arms race ongoing in the region. The country has abandoned the idea of its own army after the civil war of 1946-1949. Yet, the hopes that the feuding politicians will not resort to force and plunge the country into the abyss of an armed confrontation was justified only in part. The left, the right, the supporters of the Sandinistas in neighboring Nicaragua and pro-American forces tried to take advantage of the situation.

In the 1990, when the position of the revolutionaries has weakened, Costa Rica has made a notable economic breakthrough. In many respects it is one of the most developed states in the region and was ranked number 99 in terms of income per capita in 2009.

One of the reasons was the absence of military spending. The freed up resources were invested in the development of the ecological tourism, which is one of the main revenue sources for the country, as well as in the production of modern electronic and medical equipment.

However, with the return of Ortega to power in Nicaragua, Costa Rica regained its old concerns. Yet, it would be wrong to consider the situation in the context of long-standing difficult relationship of these two neighbors.

Current "reincarnation" of Ortega in Nicaragua would have been impossible without the flow of petrodollars from Venezuela. In recent years Costa Rica has become an apple of discord for Chavez and the USA. With the help of Laura Chinchila who refused to accept Venezuela's "base of the world" they managed to win some points back. It is significant that the president has openly declared that the country that is actively procuring weapons in Russia cannot be considered a guarantor of peace. However, no one can vouch for the fact that Caracas will not win back the next round of the fight with Ortega.