Who is Muammar Gaddafi? 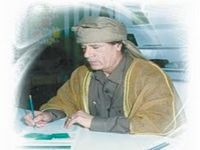 How can you call someone a dictator a leader who overthrew a corrupt monarchy, modernized the country, won the highest HDI in Africa, and applied a direct democracy system of government?

Gaddafi has always supported revolutionary movements around the world. When the media - in the service of the U.S. - praised the apartheid regime South Africa, young Gaddafi in Libya trained and sent them back with the best weapons to win freedom in South
Africa.

Suddenly the press began a daily attack on the leader Muammar Gaddafi, to distill hatred, spreading lies, forging videos for what? What does it prove? The crimes of the Libyan government? Apparently this journalistic line was caused by popular uprisings in Algeria, Tunisia, Yemen and Egypt.

In fact, it is more a question of one more terrorist strategy of the government of the United States of America to recover influence in the Arab world. In Egypt, the government fell in U.S. confidence. Mubarak was merely an agent of U.S. and Israel interests in the region. With the fall of Mubarak, Iranian ships began to circulate in the vicinity of Israel, causing unease and anger in the diplomatic environments subservient to imperialism and Zionism.

After losing Egypt, the U.S. government tries to divide and weaken Libya, and this effort receives support from the supporters of Bin Laden, and thousands of Egyptian refugees that over the years have taken refuge in eastern Libya, fleeing the repression in Egypt. After the Egyptians came Algerians, Tunisians and Somalis, followers of Al Qaeda. They enjoyed the hospitality of the Libyans and then the next thing they stabbed them in the back, triggering a revolt that has left tens of victims, through sabotage, terrorism and destruction of public property.

But who is this Qaddafi that the media suddenly started to attack in all forms, and even in a most cowardly form? Gaddafi led a revolution to overthrow King Idris, a puppet of Italian and American interests in the region. At the time, the largest U.S. military base abroad was in Libya, Qaddafi and his supporters surrounded the base and gave 24 hours for all invading foreigners to leave the country.

In power, Gaddafi did not like the Arab monarchs, did not build palaces with gold, not buy luxury yachts or collections of imported cars. He devoted himself to rebuilding the country, ensuring better living conditions for the people. Today Qaddafi is not president or prime minister of Libya, but the media wants him to resign a post which does not exist.

The lies of the media cannot hide the fact that Gaddafi has supported the struggles of peoples for liberation in Nicaragua, Cuba, Angola, Mozambique, South Africa and many other countries, specifically concretely helping the people who fought for liberation. In practice, Gaddafi has always been a benefactor of mankind, but for the mercenary media, a benefactor is one who creates wars in search of profits for the arms industry or to dominate the world, as were the wars created by the U.S. in Korea, Vietnam, Iraq, Palestine, Afghanistan, El Salvador, Nicaragua and many other countries.

This utterly ridiculous gossip of wealth and strange customs have always been exploited by the media, it was with Saddam Hussein, Yasser Arafat, Fidel Castro, Ahmadinejad, Hugo Chavez and etc. It is enough to be a serious ruler that does not seriously kneel down and cower in fear before the United States and is not intimidated to be demonised and disparaged by the mercenary media.

Another fact that the media cannot falsify is the HDI (Human Development Index) measured by UN officials. These data indicate, for example, that Libya had in 1970, a situation a little worse than Brazil (HDI of 0.541, against 0.551 of Brazil.) The Libyan index surpassed the Brazilian years later, and in 2008 was well ahead: 0.810 (ranked 43rd), compared to 0.764 (ranking 59th). All three sub-indices that comprise the HDI is higher in the African country: income, longevity and education.

In the HDI recast the difference remains. Libya is ranked the 53rd (0.755) and Brazil 73rd (.699). Libya is the country with the highest HDI in Africa. Therefore, the best distribution of income, and health and public education are free. And almost 10% of Libyan students receive scholarships to study in foreign countries.

So what kind of dictatorship is this? A dictatorship would never allow this kind of policy for the benefit of the people.

Gadhafi wrote the Green Book, the Third Universal Theory, which deals with controversial and real issues. He complains, for example, about the falsification of democracy through parliamentary assemblies. In most countries that consider themselves democratic, including the United States of America, political parties are organized criminal gangs to loot the people's money in legislative assemblies, City Councils, House of Representatives, etc.

This observation - and a book in publication - certainly irritate and anger them? The defenders of parliamentary democracy? The Green Book, written by Gaddafi, says that workers should be involved and self-employed, and that the land must be of those who work it and those who live in the house. And power shall be exercised by the people directly, without intermediaries, without politicians, through popular congresses and committees, where the whole population decides the fundamental issues of the district, city and country. These words, which everyone knows are true, revolt and irritate those few who benefit from the falsification of democracy, especially the capitalist regimes.

But the press will keep on on forging the news, boiling hatred by spreading lies, because it is following orders from the U.S. government, very interested in the large oil reserves of Libya.

Major newspapers and television channels in the world use news agencies from the United States, all biased, misleading and deceptive. The lies that the news agencies sell buy public opinion, and most people? By naivete or misinformation they behave like puppets, repeating whatever the U.S. government determines and imposes.

This is not the first nor will it be the last, the Libyan Arab people face powerful foreign powers. Again the Libyan people will win, because they have the leadership of Muammar Qaddafi, an effective, strong and honorable guide.

*In a rare interview with Western journalists in January 1986, only months before the U.S. terrorist bombing of Libya, the Leader of the Revolution spoke frankly about his life and how he had been misunderstood by the West. Meeting the journalists in his tent he told of how he admired former US Presidents George Washington and Abraham Lincoln and of other world leaders he admires like "Egypt's late Gamal Abdul Nasser, India's Mahatma Gandhi, Sun Yat-Sen of China and Italy's Garibaldi and Mazzini." (Really, I'm a Nice Guy, Kate Dourian, Tripoli, Libya.)

He spoke of his favourite book The Outsider by British author Colin Wilson and others he likes such as Uncle Tom's Cabin and Roots. Throughout this interview the profound thinking and innate humanity of Muammar Qadhafi shone through.

He also stated in another interview: "I see the press as being the messengers between me and the world to tell them the truth."

Translated from the Portuguese and appended by: