Colonel Muammar Gadhafi, the Leader of the Revolution in Libya, has made a defiant speech in Tripoli calling those behind the unrest "cockroaches", "cowards" and "traitors" whose aim it is to humiliate Libya by sowing chaos. 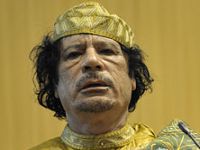 There is no doubt that Colonel Muammar Gadhafi is facing the greatest test of his political life, with the rest of the world looking on. On to what, depends on the news source. Some would have us believe that Libya is close to civil war, with reports of shelling among artillery units, others speak of desertions, others speak of French Mirage jets while actually showing unarmed Russian military aircraft, while others speak of attacks against unarmed civilians, yet show then parading around in jeeps with heavy machine guns.

In a word, chaos. Not only no doubt in some parts of Libya but also in the reporting. While Colonel Gadhafi was reported by some to have fled the country to Venezuela, there he was today standing defiantly in the barracks of Bab Al-Azizia in Tripoli, declaring that the protesters were a tiny percentage of Libya's population (less than one per cent) and calling on all loyal Libyans to take to the streets tomorrow wearing green armbands to show their loyalty to the Government.

He declared that he had not authorised the Libyan armed forces to use force against the protesters.

Quoting the Chinese example of Tiananmen Square, he stated that national unity is worth more than "a small number of protesters" and vowed to execute those who threaten Libya's national unity. Islamist separatists in Eastern Libya have reportedly taken Government loyalists hostage, raising the spectre of an extremist movement which indeed intends to take advantage of any eventual tensions among Libya's myriad of ethnic groups.

The main protests began in Eastern Libya, more precisely the region called Cyrenaica. This is home to an extremely complex grouping of peoples and tribes, an ethnic reality so easily and quickly exploited in so many other areas of the Arab-speaking world. Around the second largest city in Libya, and capital of Cyrenaica, Benghazi, reside the Arafah, the Darsa, Abaydat, Barasa, Abiid, Awaqir, Fawakhir, Zuwayah, Mugharbah, Majabrah, Awajilah and Minifah.

The question remains, who or what is behind these popular uprisings/ethnic tension? Certainly it appears that the scenario is very different from Egypt and Tunisia. Time will tell whether the Libyan people have risen up against Colonel Gadhafi, as the western press says, or whether what is happening in Libya is a handful of agents provocateurs trying to destabilise the regime, as the Government says.