U.S. may bring down the internet? 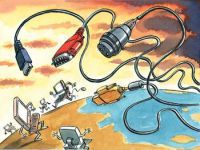 In the popular upheaval that affects Egypt, a fact that drew attention. The dictator Hosni Mubarak, terrified at the vaunted ability to mobilise social networks, managed to close down the internet for long hours. This blow to freedom of expression has not had the desired effect, but raised suspicion about real freedom in the Net.

Several studies confirm that the Internet is indeed vulnerable. In moments of greatest tension in the class struggle, it may be at the mercy of the sector of big corporations and also from governments. In a recent site, Cuarta Generación, there is evidence that the U.S. is investing heavily to not be more surprised by the Net.

The "logic bombs" of the empire

The report said the Pentagon has developed so-called "logic bombs" that can "disconnect the internet from countries and adversaries" and disrupt online communication. In addition to closing down the Net, the U.S. can also interfere in their own broadcasts and texts.

"Through the central plane of U.S. broadcasts, called the "Unified Command," the Pentagon is able to conduct psychological warfare broadcasts on AM and FM and UHF radio and VHF and UHF TV: circling an area without internet connection, the "Unified Command" can pass in a large area of unprotected Wi-Fi."

Fierce war in the virtual world

"We have these operations using satellite equipment and satellites without using vessels. You can even have a cyber version of a pirate radio station," explains the professor of the Naval Postgraduate School, John Arquilla. The U.S. government has also evolved mechanisms for interfering with cell phones.

Through technology developed by the U.S. company Textron, called Fastcom (Airborne Forward Secure Transmissions and Communication), it is possible to use drones (unmanned aircraft), balloons or land roads to access cellular (mobile) data and 3G. "The military users of this network can receive data from intelligence and reconnaissance. They have sources of strategic information and use voice and data via Viasat satellite."

In summary, the war in the virtual world is becoming increasingly fierce and bloodthirsty. Those who master this technology will have a strategic role in the future of communications. The one who will be skating will be an easy prey in the hands of the capitalist powers and corporate giants.