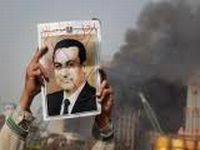 President Obama sent the known oil industry lobbyist to Egypt, former vice chairman of the American International Group (AIG), Frank Wisner Jr., to negotiate the transition from dictatorship to democracy. President Obama should have taken into account the factor of proximity of the chosen negotiator with the energy industry and his intimate relationship with the financial market by considering AIG's role as the primary insurer of the old "toxic securities" housing crisis, and the family tradition of Wisner to negotiate "transition to democracy in oil-producing countries."

Frank Wisner (father) was the administrator of Operation Ajax which resulted in the toppling of Mossadegh in Iran in 1953. Wisner the father managed the financial resources of the coup and planted lies in the press, while bribing military and religious individuals. The crime of Mohammad Mossadegh against democracy was to nationalise Iranian oil production, controlled since the beginning of the twentieth century by an English company, British Petroleum (BP).

After the coup was prepared in the CIA basement, the transition to democracy brought to power a monarch, Mohammad Reza Pahlavi, who ruled until the Islamic revolution.

Pahlavi, following the USA's understanding of democracy, negotiated annulling the nationalist legislation of Mossadegh, but in the name of freedom from competition, did not allow a monopoly of BP, authorising the presence U.S. companies in Iran.

Frank Wisner Jr., following in the footsteps of his father, was an official of the U.S. government for 36 years acting as ambassador in different countries finally retiring in the 90s. He assumed the position of counselor for Enron, at that time, Enron Oil & Gas. Since 1999, Wisner also assumed the position of Administrative Counselor at EOG Resources oil and gas, a company spun off from Enron, having subsidiaries in different parts of the world, including Egypt.

Before assuming the position of Enron adviser, Wisner Jr. was known to increase business in the countries where he served as ambassador with former conglomerates when the contract for administration of plants in India, estimated at 2 billion dollars, were ready for completion.

Wisner's office was responsible for providing advice to the government of dictator Mubarak during the privatisations of
the iron and steel industry companies and he provided advice during the development of a new regulatory framework of that country.

The revolt in Egypt began among the young, poor and unemployed revealing the bankruptcy of the neoliberal model. The economic elites are too frightened to try to find an honourable exit for their protector, Mubarak. This is translated into maintaining their privileges and what they receive from the U.S.A. Wisner is a negotiator for political transition, a protector and expert with deep knowledge of their financial interests, as a matter of fact, the same U.S. messenger.

To reassure his internal and external clients, Wisner soon after he arrived in Egypt claimed that an orderly transition does not mean the exit of Mubarak from the government. Of course he was not implying by this statement to keep power in the hands of the dictator. The crisis in the streets has weakened Mubarak and could also take the economic model.

The solution of the power brokers went to the maintenance of Mubarak in the palace associated with the elevation of the confidence man of the U.S. and former chief of intelligence, Omar Suleiman, to the position of vice president responsible for negotiating with members of the opposition about reform, policies and maintaining order. Especially the economic order. Immediately, Suleiman won the image of a man serious and lucid, something similar to the "ethical" ministry of President Collor in Brazil, responsible for an efficient transition, maintaining the interests of finance capital.

The rebellion of the poor and unemployed young people of Egypt would be closed, depending on the U.S. and local elite, considering a deal for promoting reform including freedom of the press, amnesty and free elections. Naturally the next government, following this scenario, must be responsible for maintaining the economic model, mitigated perhaps by the introduction of policies compensatory for the poorest of the population. This would be the ideal solution for U.S. geopolitical interests in the North Africa and Middle East region. Mubarak could well enjoy his retirement and his son would resume his role as a banker in England. They would be the rings and the fingers.