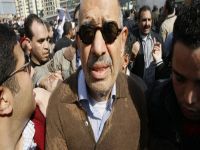 The duel between Egyptian President Hosni Mubarak and the population that demands his resignation since last week on Tuesday faces a litmus test, with the convening of protests that aim to gather one million people.  Thousands of protesters arrived at dawn in the center of Cairo, where many of them spent the night despite the curfew. "Out Mubarak," they shouted in Tahrir Square (Liberation Square), the epicenter of the revolt against the regime.

At the site, Egyptians of all ages were concentrated, from seniors to children who accompany their parents. All bring banners and placards with slogans such as "The people dismissed the president." Between the protesters, seven men dressed in white and also with white bands on their heads - as "jihadists" - shouting in Arabic and English: "I am ready to die for my Egypt." Many people displayed posters with the picture of Mubarak hanging and the phrase: "His head will roll."

"The ball is on the side of Europeans and Americans. We do not want anything from them, but also do not want them to help Mubarak," said protester Usama Alam, 43. Military helicopters flew over the city, and soldiers were deployed in the capital since Friday to control access points.

But the Army - one of the pillars next to the police of the authoritarian regime - said on Monday that it considers the demands of the people legitimate and announced that it will not use violence against demonstrators. "Freedom of expression is guaranteed in a peaceful way for everyone," affirmed the spokesman of the Army.

Despite the declaration, the military were closing access to Cairo and other cities where demonstrations were called. The highway linking Cairo to Alexandria was blocked a mile from the capital. A long line of cars and trucks of goods were waiting permission to pass, but the soldiers were obstructing the advance of vehicles.

The exits of the cities of Mansura (Nile Delta), Suez (east) and El Fayyum (south of Cairo) were also blocked by the army, according to the international press.

Mubarak, 82, in power since 1981, tried various political maneuvers in recent days, but failed to quell the protests, according to the UN High Commissioner for Human Rights, Navi Pillay. They may have left up to 300 dead and thousands injured. Navi called for calm during the demonstration scheduled today. She demanded that the Egyptian authorities, the police and the army not use excessive force and to protect civilians.

"The number of deaths is growing daily, with unconfirmed reports suggesting that up to 300 people may have been killed so far, as well as 3,000 injured and hundreds arrested," the commissioner said in a statement, quoting information given by NGOs. "The march on Tuesday seems to be a decisive moment in Egypt's transition towards a more free, fair and democratic society."

The organizers of the protests also called a general strike, which began on Monday in a nation already paralyzed with a stock exchange and banks closed, gas stations without fuel and ATMs empty.

A protest march similar to Cairo was convened in Alexandria, north of the country, responding to authorities' decision to stop railroad traffic. The rebellion joins political forces from all spectrums, from secular to Islamic opposition, through a network of Web surfers who started the movement.

Vice President Omar Suleiman, appointed to his post over the weekend in a government maneuver to try to dissipate the movement, announced on Monday that Mubarak urged the initiation of a dialogue with the opposition. "The president asked me to start immediate contacts with all political forces for a dialogue on all issues related to constitutional and legislative reform," affirmed Suleiman.

On Tuesday, however, the main opposition groups rejected the proposal for dialogue with political leadership in order to effect constitutional reforms. The Muslim Brotherhood, the largest opposition force in the country, categorically refused to talk with the regime that they consider as "having no value."

"The main demand of the entire people remains the downfall of the Mubarak regime," said Gamal Nassar, a spokesman of this formation which is considered illegal for the current government. For Nassar, the Mubarak regime is "wasting time" with these proposals, which "arrived too late."

The National Assembly for Change has the same attitude of rejection of dialogue with Suleiman. They support the Nobel Peace Prize winner Mohamed El Baradei and consider Mubarak's proposal "worthless," said Hassan Nafae, one of the leaders of this group. "The proposal is one more attempt to counter the revolution, but the pressure will continue on the streets to overthrow the Mubarak regime," said Nafae.

Hypocritical position of the U.S. and E.U.

Egypt, the most populous of the Arab countries (80 million inhabitants), is a U.S. ally in the region and manages the Suez Canal, which is essential for the supply of oil to the developed countries. Moreover, Egypt is one of two Arab countries (the other being Jordan) who signed a peace treaty with Israel.

For all these factors, the outcome of the crisis creates anxiety around the world and puts some countries in a disconcerting situation. The White House - doesn't even find ways to criticize a government which has long been an ally, but neither can it ignore the popular movement against the dictatorship - called for calm on Monday and said they were satisfied with the "restraint" shown by Egyptian security forces.

The secretary general of the Arab League, Amr Musa, former Egyptian Minister of Foreign Affairs, urged a "peaceful transition." The European Union (EU) called for "free and fair" elections in the country.

But the Israeli prime minister, Benjamin Netanyahu, has already mentioned the ghost of an "Iranian style" regime event, taking advantage of the chaos, "an organized Islamic movement to take control of the state." The Iranian foreign minister, Ali Akbar Salehi, took the opportunity to say that the rebellion in Egypt will help create an "Islamic Middle East."

"From what I know about the great revolutionary people of Egypt that are making history, I'm sure that they will play a role in creating an Islamic Middle East, for all who seek freedom, justice and independence," Salehi said, according the website of Iranian state television.

On Monday, the trains and the last Egyptian Internet service provider in operation stopped working, the Group Noor stopped operating, leaving the country without access to the Net. In response to the blockade of the Internet, Google announced the creation of a form of access to Twitter from the telephone.

A barrel of oil is traded since Monday for more than $100 for the first time in two years. The International Monetary Fund (IMF), in turn, said it is willing to help Egypt to rebuild its economy.