A decade of Plan Colombia 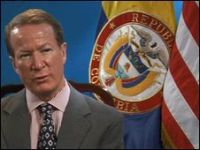 The U.S. anti-drug czar, Karl Kerlikowske, was here for a visit. It served to evaluate a decade of Plan Colombia that he and Colombian authorities categorized as successful. It is a U.S. law, Alliance Act, S1758, of 1999, while in Colombia there was no legal entity and not a minimum civil participation to validate it. While Uncle Sam spent 7.3 billion dollars, like with J.J. Rendón in the area of communications. Colombia has cost more than 55 billion dollars, largely financed with credits.

Official statements do not coincide with the numbers. Washington had moved forward in a report of 2008 when Joe Biden addressed the Committee on Foreign Affairs of the Senate. "There was progress on security and non-performance of the goals with regard to drug trafficking" was the summary. Colombia tripled as a percentage of the GDP, spending on security and defense, multiplied by two (and now more) the manpower and reduced, but not extinguished, the capacity of the guerrillas and paramilitary criminal bands. A wrong way, the goal of reducing drug trafficking by 50% in six years did not come to be consolidated until 2010.

And while in these areas the plan has mixed results in the social field, one of its advertised purposes, it failed. Half of Colombians are poor, one in five is homeless, 60% of the workforce is informal and the country is among the five most unequal in the world. Environmental performance with the aerial spraying of glyphosate on more than one million hectares is as harmful as the ones presented on human rights with more than 2,100 possible cases of civilian casualties killed by members of the security forces.

The methodological differences between the measurements that are made by the judicial bodies of the United States government and UNDOC (UN drug agency) do not allow it to be concluded that in this decade Andean cocaine shipped to the North decreased. Moreover, taking the lowest estimate, the reduction does not exceed 20%. The well known fact is that, while decreasing the areas in Colombia, they have grown in Peru. Is the displacement of crops, "the balloon effect" among and within countries.

There is almost unanimous agreement that the Plan is an exhausted strategy to cover not only formal motivations, such as the "war on drugs" and other related crimes, but in the "channeling" of the economy, which recommended the second chapter of the Plan, the deepening of neoliberalism, including agreements with the IMF and free trade, whose detrimental impacts on the majority of the population are obvious.