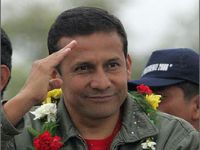 The general election in Peru will be held in four months and the left is united in the coalition Ganha Peru (Win in Peru), led by the Peruvian National Party, to support the presidential candidacy of nationalist, Ollanta Humala.

By Gonzalo Sánchez in Tercera Información

Humala is a politician and a soldier of the Peruvian military reserve whose statements and images are manipulated by the media that strives to link him with Hugo Chavez and Evo Morales in order to frighten the electorate with manipulated information about other South American presidents. Humala has positioned himself as an anti-neoliberal on several occasions. He advocates the integration of Latin America and wants to draft a new constitution to ensure participatory democracy, free and universal access to health and education and nationalization of the natural resources of his country.

Five years ago he won the general elections in the first round, but did not reach the needed majority to avoid a confrontation with the second most votes in the runoff election. At that time he denounced the gestation of a fraud driven by Alan Garcia - Peru's current president - due to a telephone recording in which Garcia said he would do everything possible to prevent the arrival of Humala to power.

Days later, in the second round, the Peruvian Nationalist Party candidate, Ollanta Humala lost the election by 600,000 votes, obtaining nevertheless more than 47% of the votes. Later, it was published that 1.2 million votes had been annulled.

Today, on the campaign trail, Ollanta Humala was able to obtain the support of most of the political spectrum from the left in Peru. The Unity of the Left, formed by the Peruvian Communist Party, Socialist Party, Revolutionary Socialist Party, Socialist Voice, the political movement Lima for All, popular leaders of various social organizations, as well as independent men and women of the left, and various organizations of the indigenous movement, have made public their support for the candidate of Win in Peru, the coalition created by the Peruvian Nationalist Party and Ollanta Humala.