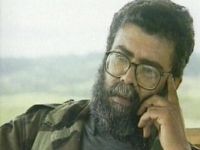 Comrades of the Central Secretariat of the General Staff, staffs of the Blocks and Fronts, Joint Commands, Commands, Speaker, Companies, and guerrillas squadrons, guerrillas and partisans, members of the Bolivarian Militias, companions of the PC3 (Clandestine Colombian Communist Party) and the Bolivarian Movement, receive a warm revolutionary welcome, along with my best wishes for a New Year of many successes.

While dismissing the year ending and greeting 2011, I send to all of you a message of solidarity to the millions of Colombians who at this time of heavy rains have been the victims of floods and landslides, as a direct result of the unrelenting, unreasonable and irrational capitalist exploitation of our natural resources, the uncontrolled disposal of huge areas to create extensive livestock, which accelerate soil erosion and, consequently, also the lack of planning, neglect and corruption that characterize the management of public administration in Colombia.

I salute the people who bear on their shoulders the burden of the crisis of our secular society, generated by the neo-colonial dependency on Washington, by state terror, by neoliberal strategies of the regime, the landowning structure of our fields and the corruption that poisons the political customs, paralyzes progress and increases social problems.

Of the many aspects of the first order due to be addressed by Colombia in 2011, we demand special attention to two bills that move in Parliament today, related to a Reparations for Victims of Violence suffered by the country for over 62 years, and the another on the property and use of land. The subjects are independent, vertebral subjects, so to speak, two faces of same coin in the recent history of Colombia, too dense for its treatment, but essential to a future of reconciliation and democracy.

The two themes need, and therefore we must fight, serious bases and management, so that they can contribute to a real solution to the conflict. The first step to take is to acknowledge the broken traditional one and of the State and its responsibility with regard to the confrontation that has scourged us since 1948, motivated subsequently during the Cold War, with the inclusion of the doctrine of national security as a concept of state in Colombia. Such recognition would facilitate a process of reconciliation based on truth.

The second point is on land reform. It deserves to be treated with urgency, to urgently return land stolen for all these years to their real owners, farmers, indigenous and black communities. It is imperative, but this whole process would be useless without the decision to settle the plantation that still grows, like a cancer.

A study by the Instituto Geográfico Agustin Codazzi and CORPOICA of 2001, showed that farms of over 500 hectares corresponded to 0.4% of landowners who controlled 61.2% of cultivable land, in a process of progressive and despicable concentration that comes from years ago and that continues even today.

A modern Land Law with strategic vision, that serves as support for peace, should include financial support, technology, roads, points of sale and, above all, must harmonize the social, territorial, cultural, and environmental aspects.

These two bills have a major constraint in their development, analysis, discussion, approval and actual implementation: participation with all its protagonists and the decision making capacity of the affected sectors, the people who have suffered in their own flesh from state violence, from the paramilitaries and landlordism.

Today it is a vain illusion to think that a Parliament such as the current one with a recognized inheritance and narcoparamilitary representation would approve a Land Law and another for Victims' Restoration, which favors justice in popular sectors.

Since these two aspects are at the root of the conflict in Colombia, its solution is obvious that a truly democratic and broadly representative scenario is needed that holds the bull by the horns and designs a definite solution.

Together with these two points, other issues in 2011 will claim priority in the national debate as the inexorable unmasking of the delinquent, gangsterish regime delivered by Alvaro Uribe, the state terrorism, mining concessions to the large multinationals, global warming, TLC, the decreasing quality of life of Colombian workers, under the neoliberal strategy underway, unemployment, instability of workers in their employment, humiliating precarious wages, corruption, reconstruction of houses, savings and villages devastated by the rains this season; these aspects will all have to be debated through the election for mayors and governors.

In all these analyses and mobilizations we will participate vigorously with the Bolivarian platform as a beacon tower, seeking the unity and organization of the people to sponsor their struggles in protest, the power, which will allow them to gain confidence in their independent strength, while at the same time seizing their own experience.

In all these journeys we will be referring or protagonists from underground or from the trench. We will not stop a single moment to fight for the political settlement of the conflict, the principles, the convictions that motivate us because we are revolutionaries who love peace. The conditions for social justice, democracy, sovereignty and socialism, were imposed by the state, and were not chosen by us.

We understand our day to day part of the commitment and attitude to life, our political ideals, our ethics and beliefs. We do not complain. Therefore, while we do not find the paths of reconciliation and democratic coexistence, we will continue developing guerrilla warfare to intensely resist aggression, participating dynamically in political and social struggles, and to open ways to Popular Power and to a New Colombia.

Not in vain we have endured and resisted over the past twelve years the biggest imperial offensive in Latin America, against a revolutionary force with more reasons, socio-political realities, ideology and revolutionary morale. To the grief of our detractors.

I greet all prisoners of war, political prisoners, my embrace of solidarity and combative embrace to all, and especially to that symbol of dignity that is Simon Trinidad, extradited by a mafia gangster and sentenced in dirty political judgments in the United States, our collective affection for him for having made known to the world how solid is the morale that cements us.

I greet the comrade prisoners who face with dignity and Revolutionary pride the continuous provocations and humiliations not giving in to official blackmail or disgusting offers of some NGOs of large bank accounts and reactionary thoughts. The guerrilla condition has no price, only generates commitment, pride and immense satisfaction to live standing with our heads held high, acting with transparency and dedication to fight for a new society.

I salute the families of our prisoners so forgotten by the media, I greet the guerrillas, militia fighters and Bolivarian combatants and popular fighters who recover from their wounds or who have been maimed or become invalid, the product of the impacts of sophisticated arsenals of the latest technology that are officially approved, even by international humanitarian rights laws.

In 2011 we will redouble activities in all respects with the force that provides us our convictions, the caution that imposes on us the experience and enormous courage of all fallen comrades and Manuel Jacobo, Raúl, Iván, Jorge Briceño (Mono Jojoy), this real hurricane with revolutionary promises and commitments, this Titan full of consequence in their thinking and practice as a Bolivarian combatant.

To all, I greet and welcome the convening of FARC-EP to advance the year we are embarking into a political solution to the conflict, social justice, national sovereignty and full democratic participation of the people in building their destiny.

Successes in 2011, strong handshake and to Victory